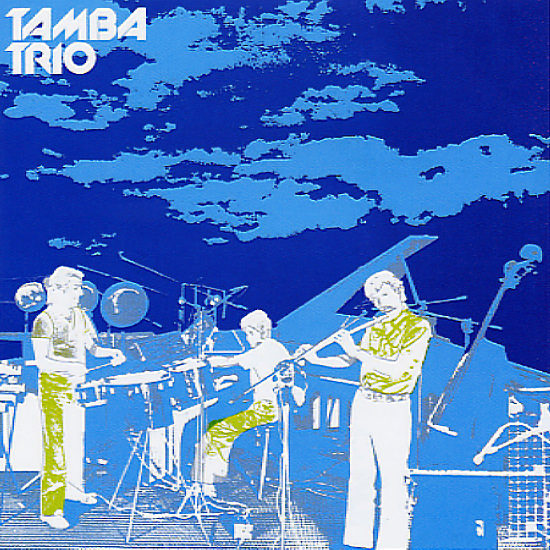 A mid 70s gem from the Tamba Trio! The record takes their core 60s sound of piano trio grooving and bossa harmony vocals, and gives it a strong 70s twist – with mellow production that flanges the style out a bit more, and arrangements that add in some extra instrumentation from the likes of Helio Delmiro, Ivan Lins, Toninho Horta, Danilo Caymmi, and Joao Bosco – each of whom play a bit of guitar on the record, the last of whom also sings a bit of guest vocals too! Luiz Eca handled the arrangements, all with that subtle sense of sophistication that we've always loved in the group – even more mature here than in the 60s, and with a sound that's totally great. Titles include "3 Horas Da Manha", "Visgo De Jaca", "Beira Mar", "Chorinho No 1", "Jogo Da Vida", "Sanguessuga", and "Beijo Partido".  © 1996-2022, Dusty Groove, Inc.
(Out of print, includes obi. Sealed.)

Tema 3D
RCA (Brazil), 1964. Used
CD...$14.99
A bossa combo that will keep you grooving forever! This crack mid 60s trio are of the same vintage as work by Brazilian legends like Sambalanco Trio, Milton Banana Trio, Bossa Tres, and other important bossa groups – and they have the added importance of being led by pianist Antonio Adolfo, ... CD

Brasil Pop
RCA (Spain), 1975. Used
CD...$7.99
Excellent set of bossa nova grooves by the great Jayme Marques. Of all of the cool reissues we have by him, this one's got the most traditional bossa feel, and it features him covering a stellar set of material that includes "Berimbau", "O Pato", "Precisio Aprender A Ser ... CD

Symphonic Jobim (aka Jobim Sinfonico)
Adventure Music, 2002. Used 2 CDs
CD...$9.99
A beautiful set of symphonic tracks based around the work of Antonio Carlos Jobim – work that stretches back to the 50s, up through 60s bossa nova, and even includes some of Jobim's more complicated orchestrations from the 70s! The music is done in the arch-baroque style of other titles on ... CD