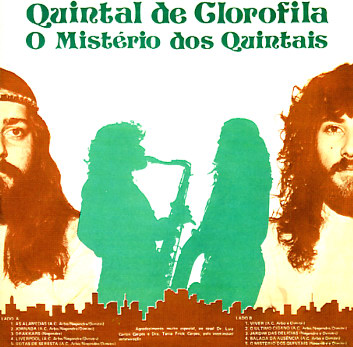 Complicated and folksy work from Quintal De Clorofila – aka Garden Of Chlorophyll – the duo of Negendre and Dimitri Arbo, singing together and working on an assortment of instruments that include acoustic guitars, casio keyboard, bandolim, microharp, soprano sax, flute, and lots of percussion! The style is as unusual as the group's name and presentation – but almost has as many echoes of other South American folk as it does more familiar work from Brazil – and although the record was cut in the early 80s, it's got an incredibly earthy tone, and sounds much more like some lost acid folk set from the late 60s! Titles include "As Alamedas", "Jornada", "Drakkars", "Liverpool", "Jardim Das Delicais", "Balada Da Ausencia", and "O Ultimo Cigano".  © 1996-2022, Dusty Groove, Inc.