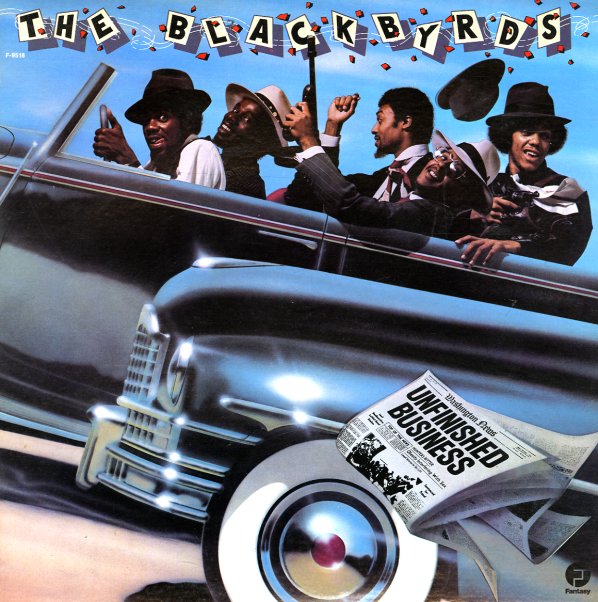 There's nothing unfinished about this business – as The Blackbyrds are at the top of their game here – working in a sweet blend of jazz, funk, and soul – all produced to perfection by their mentor Donald Byrd! The groove is quite similar to some of Byrd's best from the time – a bit fuller than the first few records by The Blackbyrds, thanks to the addition of larger horns – and put together in ways that really has them soaring towards the skies on waves or righteous soul! There's vocals on most tracks, but they really take equal place next to the group's wonderful instrumentation – especially the heady keyboards of the mighty Kevin Toney, still a key member of the combo at this point. Titles include "Party Land", "In Life", "Time Is Movin", "Lady", and "You've Got That Something".  © 1996-2022, Dusty Groove, Inc.
(Recent reissue pressing in a barcode cover. Vinyl has a pressing flaw that makes a short click during "In Life," but the rest is great!)

Flying Start
Fantasy, 1974. Very Good+ Gatefold
LP...$29.99
Not the band's first album – as you might think from the "start" in the title – but a classic batch of jazzy, funky, and soulful grooves from The Blackbyrds – one of those combos that few groups could match back in the 70s! The set's got a beautifully put-together feel ... LP, Vinyl record album

You Are My Starship
Buddah, 1976. Very Good+
LP...$13.99
A masterpiece of mellow soul and jazzy grooves from the groundbreaking Norman Connors – an album that sails to the stars on a sweet blend of mellow moments and more upbeat tracks too! The record features some crucial vocal talents from Michael Henderson and Phyllis Hyman – both ... LP, Vinyl record album

You've Made Me So Very Happy
Capitol, Late 60s. Very Good
LP...$7.99
All the best elements for Lou's Capitol work are in place – arrangements by HB Barnum, production by David Axelrod, and a hip batch of pop tracks that really push Lou into a whole new dimension! Axelrod really knows how to bring up the bass in the arrangements, and create just the right ... LP, Vinyl record album

Purple Rain
Warner, 1984. Near Mint-
LP...$24.99
One of the greatest crossover albums of the 80s – and the record that catapulted Prince very firmly into the mainstream! There's a tightness here that surpasses even that of Prince's early classics for Warner Brothers – an unabashed love of a pop hook that makes for some incredibly ... LP, Vinyl record album

Reincarnation
Kama Sutra, 1972. Very Good Gatefold
LP...$9.99
A weird mix of folk, rock, and soul – hard to describe, and the kind of record that's more typical of the post-Richie Havens era than it is the more soulful folk of Terry Callier. Some tracks are pretty heavy and rock-oriented – and titles include "Ballad For Sammy", "Emp ... LP, Vinyl record album

Can't Stop The Music
Casablanca, 1980. Very Good Gatefold
LP...$4.99
One of the last great moments from The Village People – an album released in conjunction with their huge screen debut in the film Can't Stop The Music – a huge media blitz from their producer Jacques Morali – and a record that also marked the first film appearance of the young ... LP, Vinyl record album

Brasil '65 – Introducing The Voice Of Wanda De Sah
Capitol, 1965. Very Good
LP...$19.99
That's Brasil 65, not Brasil 66 – a distinction that marks a key early stage for the great Sergio Mendes – heard here on one of his first albums to mix together bossa jazz and vocals! The approach here is a bit more like vintage bossa dates from Brazil – or a bit like some of the ... LP, Vinyl record album