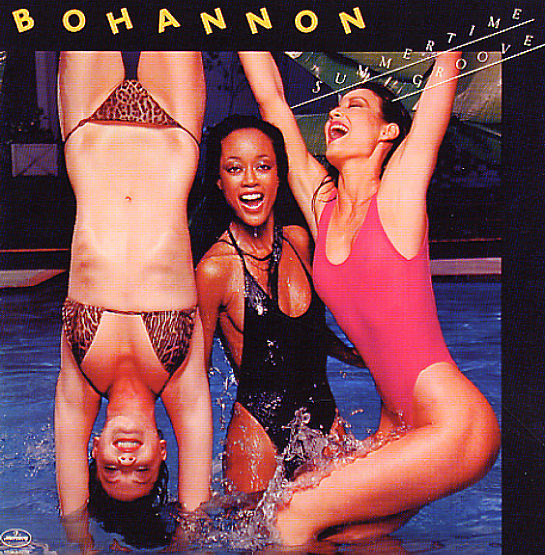 One of the biggest and best albums ever for Hamilton Bohannon – filled with quirky rhythms and really unusual grooves! Bohannon was one of the key forces in setting the scene for disco in the early 70s – and by the time the rest of the country was hitting the dancefloor in the middle part of decade, he was still moving forward, into a whole new realm of groove! The tracks on this set have some really mad rhythms – skittish and scattered, still with a dancefloor approach, but with lots of odd touches that set them apart from the rest of the pack. A key example of this is the great tune "Me & The Gang", which has this off-key piano loping out over chunky beats – but the whole thing's great, with a lot more of a sly edge than you'd expect from the cover. Titles include "Summertime Groove", "The Street Dance", "Let's Start The Dance", "Listen To The Children Play", and "I Wonder Why".  © 1996-2023, Dusty Groove, Inc.

Stop & Go (with bonus tracks)
Dakar/Solid (Japan), 1972. New Copy
CD...$18.99 19.99
A killer bit of early funk from the great Hamilton Bohannon – and quite possibly his greatest album ever – a really unique approach to funky rhythms, with a sound that's unlike anything else we can think of! The album's got a slower funk sound than Bohannon's later disco groove a few ... CD

Send My Baby Back (with bonus tracks)
Scepter/Octave (Japan), Mid 60s. New Copy
CD...$22.99 26.99
Fantastic! This is the kind of soul that we still collect vinyl for! Freddie Hughes is one of the great lost voices of the 60s, and this sparkling album of soulful tunes is a real gem! He's not the same singer as the Freddie Hughes from Chicago – and he hailed from San Francisco, a very ... CD

Spotlight On Maxine Brown (with bonus tracks)
Wand/Octave (Japan), 1964. New Copy
CD...$22.99 26.99
Beautiful material by one of our favorite soul vocalists of all-time – a hell of a singer in the 60s, but one who's never gotten her full due as the years went on – able to be heartbreaking and strong at the same time, with a quality that's still amazing all these many years later! ... CD

Fragile (with bonus tracks)
Tabu/Universal (Japan), 1984. New Copy
CD...$12.99 14.99
Nothing Fragile here – as Cherrelle comes across with plenty of power on this debut LP – thanks to sharp production from Jimmy Jam and Terry Lewis on some of the best cuts, and an overall groove that's right on the best side of early 80s soul! The Jam/Lewis tracks are heavy on ... CD

Don't Look Any Further (with bonus tracks)
Gordy/Universal (Japan), 1984. New Copy
CD...$12.99 14.99
Dennis Edwards made some great music with The Temptations – but a record like this is key proof that he was maybe even stronger as a solo act on his own! There's a mature 80s vibe to the whole record – one that comes from the commandingly strong, soulful style that Edwards perfected ... CD

What's Going On (original Detroit mix)
Motown/Universal (Japan), 1971. New Copy
CD...$13.99 16.99
One of the few cases in the history of pop music where the record is worth all the hype! Marvin blew everyone's mind when he unleashed this amazing suite of political soul tunes – not only just because he'd moved past the simple love songs of earlier years, but also because he was working ... CD