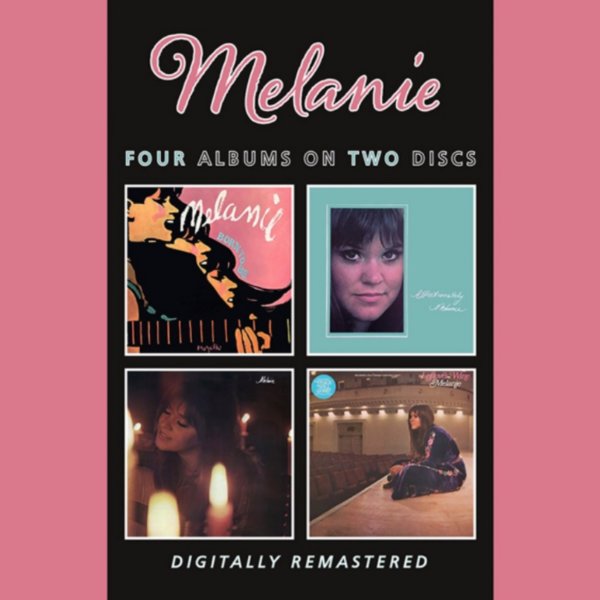 Four full albums from Melanie – all brought together here in a single set! On Born To Be, Melanie's a folkie at heart, but one who's very open to new ideas too – as you'll hear in this surprisingly offbeat set from the late 60s! The record mixes Melanie's raspy, almost eerie vocal approach with some compelling charts from Roger Kellaway – who respects the folk impulses at the core, but also brings in some unusual inflections in the other instrumentation – that post-folk approach that was showing up in records by Leonard Cohen and others of the singer/songwriter generation. The difference is subtle, but very striking – and very different than the way the set would have been recorded a few years previously. Titles include "Christopher Robin", co-written with AA Milne – plus "In The Hour", "I'm Back In Town", "Bobo's Party", "Close To It All", "Merry Christmas", and "I Really Loved Harold". Next is Affectionately Melanie (aka Melanie) – a seminal self-titled set from Melanie – an album that's still proudly folk in some parts, while also embracing some of the more hard-edge styles of some of her contemporaries too – echoes of soul in some of the rhythms, a bit of grit in the instrumentation – which really seems to fit well with her raspy vocal style! The mix is almost a folksy approach to Janis Joplin territory – kind of a surprise if you only know the sweeter side of the singer – and titles include "Soul Sister Annie", "Uptown Down", "Again", "Beautiful People", "For My Father", "Deep Down Low", "Take Me Home", "I'm Back In Town", and "Any Guy". Some cuts feature arrangements by the great John Cameron – who we suspect of bringing the groovier elements to the record! Candles In The Rain is a record that shows the increasing strengths of Melanie as a singer/songwriter, and the confidence that her label had in letting her try out new material – as the mostly-pop Buddah Records allowed Melanie and producer/arranger Peter Schekeryk to really stretch out in the studio! Some moments are intimate, some have a full righteous quality – and the unique vocals of the lady herself have a subtle power that's almost out of time at the start of the 70s – yet that's also its great appeal. Titles include the hit "Candles In The Rain" – plus "Carolina In My Mind", "Citiest People", "The Good Guys", "Lovin Baby Girl", "Leftover Wine", and a version of "Ruby Tuesday". Leftover Wine is a set that mostly features Melanie singing solo at Carnegie Hall – just her vocals and guitar standing out in stark contrast to some of the larger arrangements used on a few of her previous records! The approach is great – and brings all the fragile beauty of her unique style right into the limelight, all with a timeless vibe on titles that include "Close To It All", "Uptown & Down", "Psychotherapy", "I Don't Eat Animals", and "Leftover Wine". Yet the album also features one studio track – the heady "Peace Will Come", which features some nice keyboards from Ron Frangipare!  © 1996-2022, Dusty Groove, Inc.

Don't Turn Your Back On Me/This Is Jackie De Shannon
Liberty/BGO (UK), Mid 60s. New Copy
CD...$12.99 18.98
A pair of albums from the great Jackie DeShannon – back to back on a single CD! First up is the UK-only release Don't Turn Your Back On Me – a great batch of material with a sweet west coast pop groove – and one that includes a fair number of original tunes written by Jackie ... CD