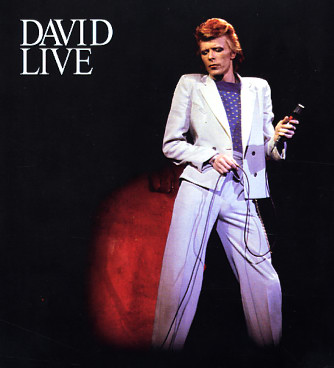 A classic double live set from David Bowie – recorded during his years as The Thin White Duke (as you might guess from the cover!), but featuring a fair bit of material from the Ziggy Stardust years! The music is pretty straightforward, and pretty rocking – lots of fuzzy guitar in the Diamond Dogs/Aladdin Sane mode – played by a group with Earl Slick on guitar and Michael Kamen on electric piano and moog. Titles include "Rebel Rebel", "1984", "Knock On Wood", "Here Today Gone Tomorrow", "Watch That Man", "Cracked Actor", "All The Young Dudes", "Width Of A Circle", "Jean Genie", "Rock N Roll Suicide", "Big Brother", and "Panic In Detroit".  © 1996-2022, Dusty Groove, Inc.
(Out of print, mid 90's Japanese pressing – still sealed with obi! Shrink has a small price sticker remnant.)

Stage (Japanese pressing – with bonus track)
EMI (Japan), 1978. Used 2CD
CD...$24.99
A tremendous live set cut during the height of David Bowie's years in Berlin – and the kind of performance that showed that his more experimental work from this time could be every bit as appealing as the classics! The first half of the set features some amazing numbers from the Heroes and ... CD