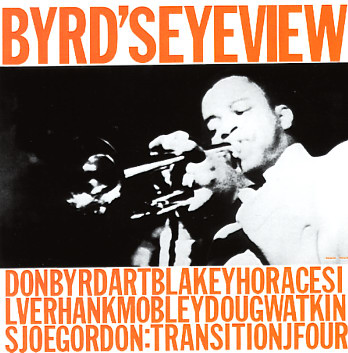 A wailer! This rare 1955 album is one of Donald Byrd's first records as a leader – recorded for the tiny Transition label in Boston, but with a hardbop groove that's right up there with his early work for Savoy and Blue Note. The record is practically a Jazz Messengers session – as it features Art Blakey on drums, Horace Silver on piano, Hank Mobley on tenor, and Doug Watkins on bass – and it's also got the unique aspect of a two-trumpet frontline, as the young Joe Gordon joins Donald on the instrument for the session. Tracks are long and open-ended – with incredibly well-crafted playing that really keeps the set fresh, despite the young age of Donald at the time. Titles include "El Sino", "Doug's Blues", "Hank's Tune", and "Hank's Other Tune".  © 1996-2023, Dusty Groove, Inc.

Mustang! (with bonus tracks)
Blue Note (Japan), 1966. New Copy
CD...$18.99 22.99 (CD...$14.99)
One of Donald Byrd's most fantastic records for Blue Note – and one of three gems that he recorded with the great Sonny Red on alto sax! Byrd and Red work magnificently together – and the two of them play with a tightness and funkiness that's missing from a lot of their other records ... CD