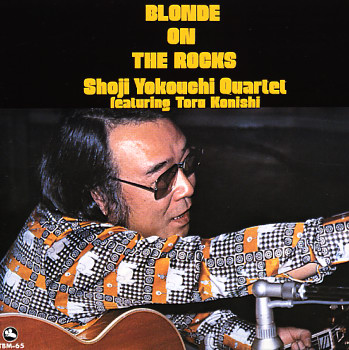 A great title, and a great little album to match – one that features two guitars, plus bass and drums – in an open-ended style that's mighty nice on the ears! The set's got a lean kind of sound – as you might expect from the lineup – and Japanese players Shoji Yokouchi and Toru Konishi really explore some great territory in jazz with the format. Some numbers actually have a fair bit of a groove – with one guitar playing rhythm, and the other doing solos – while others have more of a spacious, more contemplative feel – a bit like some of the 70s work of Jim Hall. There's definitely a Hall-like sense of space and timing going on here, but as with many Three Blind Mice sessions from the time, the album's also filled with surprises too. Titles include "The Night Comers", "Swingin On A Camel", "Blonde On The Rocks", "Softly As In A Morning Sunrise", and "Message".  © 1996-2021, Dusty Groove, Inc.
(Includes obi.)

2nd Album (Japanese paper sleeve edition)
Three Blind Mice/Think (Japan), 1970. Used
CD...$29.99
A great album from one of the greatest Japanese reedmen of the 70s – a player who's not that well known on our shores, but who served up a run of great little records like this at the time! Kosuke Mine has this sound that's sharp, but extremely fluid too – a way of running fast with ... CD