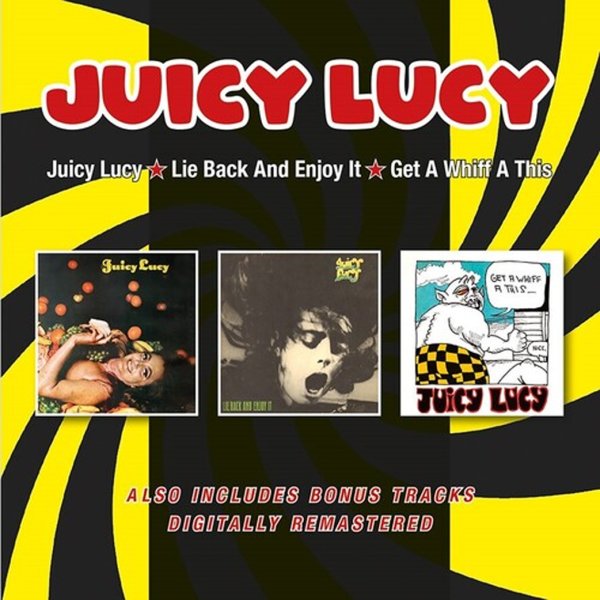 Three full albums from Juicy Lucy – plus bonus tracks too! First up is the self-titled debut from Juicy Lucy – an American act who made a trip to the London scene in the late 60s, where they found a way to forge a whole bunch of influences into a very unique groove! Had they stayed back home in Cali, Juicy Lucy might have gravitated towards the Bay Area scene, and ended up sounding a bit freakier and hippieish – but in London, they sharpened their sound, unleashed some deeper bluesy currents, and put the whole thing together with a mix of wit and flair that really set them apart! The group boasts great lead vocals from Ray Owen, a cool mix of electric and acoustic sax parts from Chris Mercer, strong lead guitar from Neil Hubbard, and a range of great sounds from Glenn Ross Campbell – who uses steel guitar and mandolin in ways that are very different than American groups of the time. Forgive the album its quickly-dated, exploitative cover – because it's got a lot more to offer than that – and titles include "Chicago Northwestern", "Train", "Nadine", "Mississippi Woman", "She's Mine She's Yours", and "Just One Time". Lie Back & Enjoy It is hard and heavy work from Juicy Lucy – a group who are even stronger here on this second set than on their debut – effortlessly spinning out lines that are very much in the best hard rock modes of the period, but which also retain some nice bluesy influences as well! The group's a sextet – and in addition to some very unique vocals from singer Paul Williams, who also plays piano and congas, the set also has some surprisingly nice use of steel guitar and mandolin, but never in ways that sound like the instruments might in the handling of some of the Cali crowd at the time. Lead guitar is from Mick Moody, sax and keyboard lines are from Chris Mercer, and titles include "Pretty Woman", "Built For Comfort", "Whisky In My Jar", "Hello LA Bye Bye Birmingham", "Thinking Of My Life", and "Willie The Pimp". For Get A Whiff Of This, the title's a bit of a joke, especially in relation to the cover – but Juicy Lucy come on strong here, with a searing sound that shows that they're way past the novelty of the image on the front! Over the course of the previous records, the group really honed their unique blend of American blues and Brit hard rock inspiration – very well-focused here, with a sound that paves the way for some of the bigger crossover acts that would soon dominate American radio in the mid 70s – something the group unfortunately never got the chance to do. Titles include "Mr Skin", "Midnight Rider", "Mr A Jones", "Sunday Morning", and "Jessica". 2CD set features the bonus b-side tracks "Walking Down The Highway" and "I Am A Thief".  © 1996-2022, Dusty Groove, Inc.