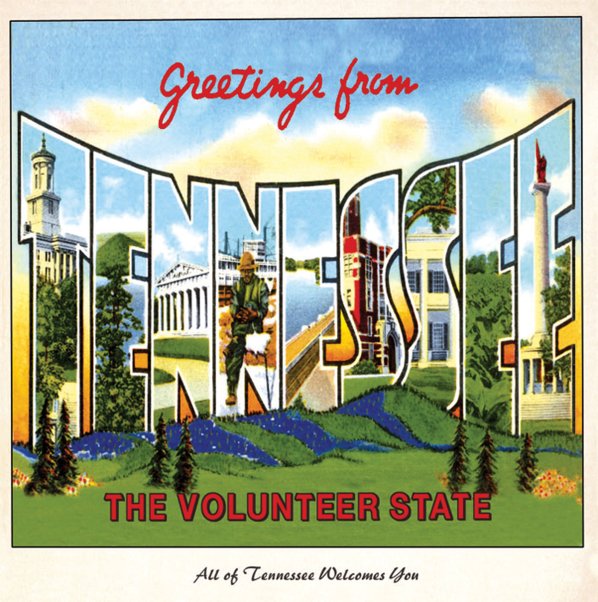 Greetings From Tennessee – The Volunteer State

A hefty helping of songs about the state of Tennessee – served up here in a great mix of postwar country and early rock and roll – maybe no surprise, given that the state is home to both Memphis and Nashville! Some tunes here are familiar classics, others are more obscure – and they're brought together in a great mix of sounds that's very much in keeping with the style we love on other compilations from the Bear Family label. 25 tracks in all – and titles include "Tennessee Flat Top Box" by Johnny Cash, "Tennessee Whiskey" by David Allen Coe, "Tennessee Blues" by Tex Ritter, "Tennessee Two Step" by Joe Maphis, "Tennessee Local" by Tennessee Ernie Ford, "FOB Tennessee" by Kenny Roberts, "Tennessee Rag" by Country All Stars, "Tennessee Saturday Night" by Ernest Tubb, "Tennessee Jive" by Johnny Horton, "Tennessee Boogie" by Zeb Turner, "Tennessee Toddy" by Marty Robbins, and "I'm Goin Back To Tennessee" by Jimmie Logsdon.  © 1996-2021, Dusty Groove, Inc.

First Ten Years 1956 to 1966 (4CD set)
Bear Family/Decca (Germany), Late 50s/Early 60s. New Copy 4CD
CD...$129.99 149.99
The first-ever package to ever do justice to the influential talents of Bill Anderson – one of the more important songwriters of the 50s country scene – and a budding singer who helped introduce whole new modes of expression to the music! Bill's tunes were sung by many – and had ... CD

Auctioneer
Dot/Bear Family (Germany), Late 50s. New Copy
CD...$13.99 19.99
A nice collection of work from Leroy Van Dyke – a singer who may not have been the purest country talent of his time, but who did a really great job bridging both the worlds of hillbilly and postwar pop! Leroy's got a great voice – warm and fluid, but never too mellow – and on ... CD