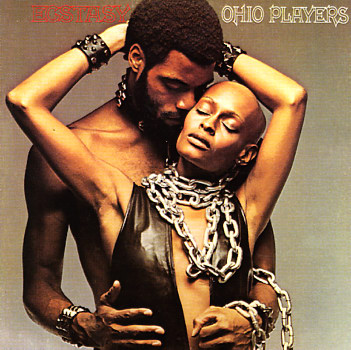 Fuzzy funk from some of the all-time greats – one of the key Westbound Records classics from the mighty Ohio Players! This album's got the Players working at their all-time best – a bit jazzy, with a more sophisticated undercurrent than some of their contemporaries – a righteous vibe that's light years ahead of the 45 crowd – with plenty of space on the album to try out a wide variety of ideas in their music! Junie Morrison did the arrangements for the record, and the album's a great blend of light and dark moments throughout – sometimes a sweet vocal, sometimes a heavy piano line – all wrapped up with a sense of focus, but still enough freedom to let the group do their thing! Features the incredible title cut "Ecstasy", the great instrumental "Not So Sad And Lonely", and the tracks "Do You Feel It", "Black Cat", "Sleep Talk", "Food Stamps Y'All", and "Short Change".  © 1996-2022, Dusty Groove, Inc.

Keep On Steppin'
Event/Southbound (UK), 1974. New Copy (reissue)
LP...$16.99 22.99
Quite possibly the last really hard-hitting funk album from The Fatback Band – and although their first record on the Event label, a set that cooks every bit as hard as their first few for Perception! The style here is funky 45 soul at its best – lots of hard crackling drums, funky ... LP, Vinyl record album