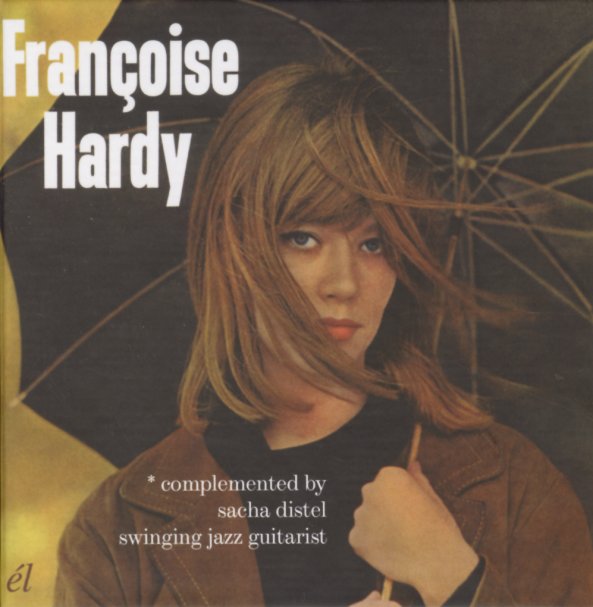 A very cool little package – one that's got one CD of early work by French singer Francois Hardy – and two more CDs that feature lots of fantastic jazz material from Sacha Distel! CD1 features Hardy at her early best – singing blue-tinged French pop on both her debut album, and on a special album recorded in Italian – which features backings by Enzio Leoni, and tunes that are a nice variation from her better-known French material – especially as a number of tracks are reworked Italian versions of tunes from the first album! Titles include "Ca A Rate", "Oh Oh Cheri", "Il Est Parti Un Jour"," J'Suis D'Accord", "C'Est A L'Amour Auquel Je Pense", "L'Eta Dell'Amore", "Ci-Sto", "Per Tanto Tempo", "L'Amore Va", and "Quelli Della Mia Eta". The real treat here might be the music by Sacha Distel, though – as the artist is also known as a French pop singer, with many hits – but works here as a jazz guitarist, with a strongly chromatic sound! Amidst his vocal recordings, Sacha made a fair number of early jazz albums too – and nearly all of them are here on the set. The package features the EP Hommage A Django, with arrangements by Claude Bolling; another EP done in co-leadership with reedman Bobby Jaspar; performances with the Bobby Jaspar All Stars at Club Saint Germain; a quartet date with guitarist Jean-Pierre Sasson; Distel's famous album with pianist John Lewis, which also features great tenor from Barney Wilen; the very rare Jazz Today record, with trombone, arrangements, and songs by Billy Byers; and a few tracks from the soundtrack to Roger Vadim's Pride chapter of The Seven Deadly Sins. 36 Distel tracks in all – and 22 more by Hardy – all with a nice booklet of notes!  © 1996-2020, Dusty Groove, Inc.

Enregistrement Public Au Theatre Le Palace (with bonus tracks)
Philips/Mercury (France), 1980. New Copy 2CD
CD...$22.99
A fantastic live set from Serge Gainsbourg – and a record that stands as a concert accompaniment to his famous albums Aux Armes Et Cetera and Mauvaises Nouvelles Des Etoiles – both done in a reggae mode with work from Sly & Robbie! The famous Jamaican duo are part of the group here ... CD

Grand Prix
Universal (France), 2020. New Copy
CD...$22.99 (LP...$32.99)
Rock-solid work from the mighty Benjamin Biolay – one of the few contemporary French talents who moves us as much as his counterparts from the 60s scene – and an artist who's maybe now got a legacy that's even larger than some of his earlier heroes! The album's got a sound that's as ... CD