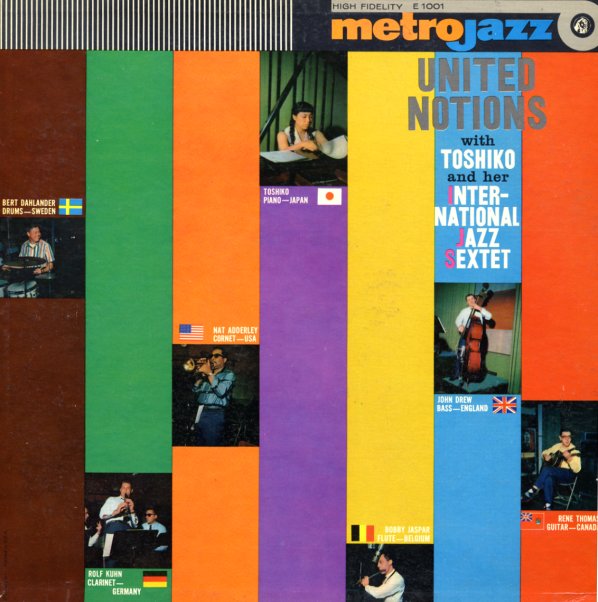 A unique early large group session from pianist Toshiko Akioshi – recorded with a hip group of international players! The record's almost a precursor of some of Akioshi's better-known big band work of later years – but it's got more of a small combo feel overall, thanks to a tight septet lineup that includes Toshiko on piano, Nat Adderley on cornet, Rolf Kuhn on alto and clarinet, Bobby Jaspar on tenor and flute, Rene Thomas on guitar, John Drew on bass, and Bert Dahlander (aka Bart Dahl) on drums. Doc Severinson stands in on trumpet for Adderley on a few numbers – but the real stars of the show are the reedmen, who get plenty of space to do their thing, and seem to show Toshiko's early preference for sharp-edged solos with a lot of feeling. Titles include "Sukiyaki", "Swinging Till The Girls Come Home", "United Notions", and "Civilized Folk".  © 1996-2022, Dusty Groove, Inc.
(Original red label pressing, with deep groove! Cover has green tape on the bottom seam, but this is a great copy overall.)

Up In Erroll's Room
MGM, 1968. Near Mint-
LP...$7.99
A really groovy 60s album from pianist Erroll Garner – one that mixes his already-great style on the keys with some larger backings from the great Don Sebesky! The approach is wonderful, and seems to give Garner even more punch than usual – and he's working with an excellent core combo ... LP, Vinyl record album