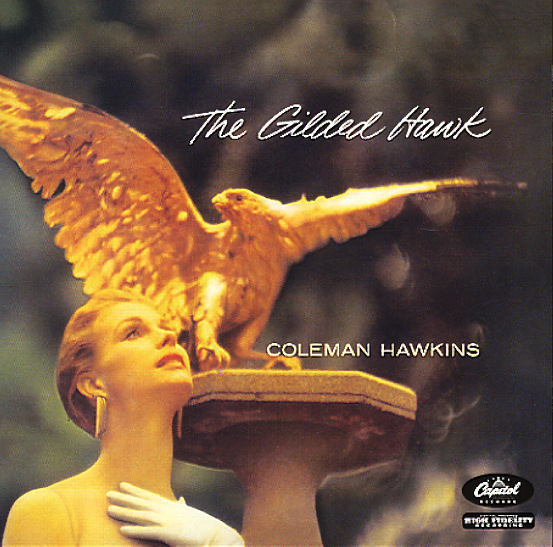 Also available
Coleman Hawkins — Gilded Hawk ... CD 14.99
Tremendous work from Coleman Hawkins – a sublime "with strings" session from the 50s, and one of Bean's greatest albums from the decade! The setting is quite different than other sets with Hawk on tenor – soft strings from Glen Osser, cascading beautifully and gently – never too sleepy, with just the right pitch to allow Hawkins to step out soulfully over the top! The subtle emotion of the backdrops is wonderful – very much in the best Verve spirit of a set like this – which also makes the record one of Osser's greatest achievements too. Titles include "I'm Yours", "My Mother's Eyes", "Stranger In Paradise", "Autumn Leaves", "Out Of The Night", and "Boulevard Of Broken Dreams".  © 1996-2023, Dusty Groove, Inc.
(Mono rainbow label pressing. Cover has some wear and aging, splitting at the bottom of the spine, and some writing in pen in back.)

Hawkins Alive At The Village Gate
Verve, 1962. Near Mint-
LP...$29.99
Long, lean, and later work by Coleman Hawkins – recorded in a beautifully stripped-down and free setting at the Village Gate! The tracks are all pushing the 10 minute mark – and feature Hawk soloing in that open, exploratory way he was using during the time – a mix of older ... LP, Vinyl record album

Hawk In Hi-Fi
RCA, 1956. Very Good+
LP...$16.99
A wonderful late album from Coleman Hawkins – recorded in 1956 with the orchestra of Billy Byers, including soloists Zoot Sims, Al Cohn, and Hank Jones. Coleman's the main blower, though – and the arrangements have a solid base that lets him open up in that exploratory tone he was ... LP, Vinyl record album

Today & Now
Impulse, 1962. Very Good+ Gatefold
LP...$24.99 (CD...$9.99)
A beautiful record – but that's no surprise, since most of the later work of Coleman Hawkins tends to be great! The setting is quite laidback – and Hawkins' time-weathered tenor is placed in a perfect setting with Tommy Flanagan on piano, Major Holley on bass, and Eddie Locke on drums. ... LP, Vinyl record album