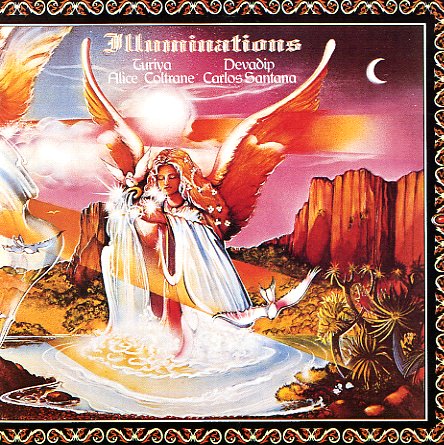 A really mindblowing collaboration between two of the most spiritual mainstream musicians of the early 70s – legendary guitarist Carlos Santana and spiritual jazz guru Alice Coltrane! The set came at a time when Santana was reaching for much deeper ideas in both his music and his personal life – and Coltrane turned out to be a perfect creative fit, as she'd already been down the path with her own music for years – and helps Carlos here find an incredible setting that really lets his new vision take flight! The album's a very collaborative effort – with Alice on piano, organ, and harp – but Coltrane also brings in some fuller arrangements on half of the tracks – really opening things up, alongside other musicians who include Jack DeJohnette on drums, Dave Holland on bass, Jules Broussard on soprano sax and flute, and Tom Coster on both acoustic and electric piano. The strings are sublime – as heavenly as on Alice's own records – and titles include "Angel Of Air Angel Of Water", "Bliss The Eternal Now", "Angel Of Sunlight", "Illuminations", and "Guru Sri Chinmoy Aphorism".  © 1996-2021, Dusty Groove, Inc.
(Hybrid Super Audio CD pressing – also works in standard players!)