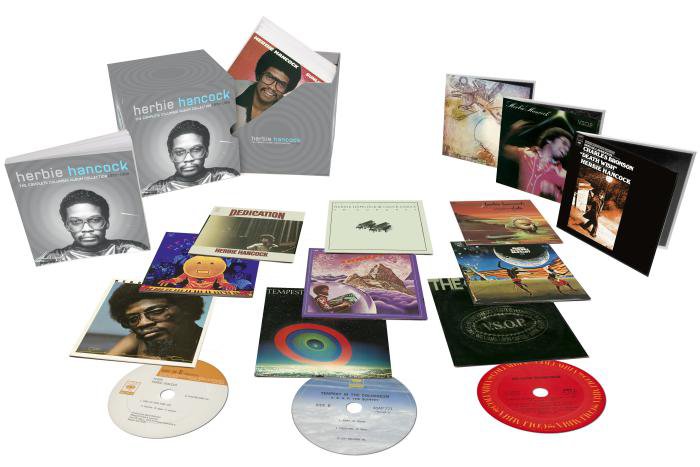 A really really amazing little set – and a package that goes way beyond most other complete album collections on the market! First off, this one is REALLY complete – as it not only features all of Herbie Hancock's Columbia albums from the US, but also his rare Japanese-only records, and key sessions with other artists like the VSOP group, singer Kimiko Kasai, and pianist Chick Corea – all wrapped up in a totally cool box that features a 200 page book, and tiny LP sleeve versions of each individual album! There's a number of albums never issued in the US, and a few others are making their US debut on CD too – mixed here with key classics, and some others that haven't been in print for years. Herbie's sense of vision and genius hold strong throughout – from electric to acoustic to electric and more acoustic modes recorded over a 16 year span between 1972 and 1988. Albums include Sextant, Head Hunters, Dedication, Thrust, Death Wish, Flood, Man-Child, Secrets, VSOP, Herbie Hancock Trio, VSOP The Quintet, VSOP Tempest In The Colosseum, An Evening With Herbie Hancock & Chick Corea, Sunlight, Feets Don't Fail Me Now, Directstep, Live Under The Stars, Five Stars, Butterfly (with Kimiko Kasai), Monster, Mr Hands, Magic Windows, Herbie Hancock Trio with Ron Carter & Tony Williams, Quartet, Lite Me Up, Future Shock, Sound System, Village Life (with Foday Musa Suso), Round Midnight (soundtrack), and Perfect Machine. A stunner of a set – even if you already own some of the records inside!  © 1996-2021, Dusty Groove, Inc.
(Out of print. A great copy of a fantastic box set – just a little minor shelf wear on the outer box and everything else is in great shape!)

Takin' Off (non RVG edition – with bonus tracks)
Blue Note, 1962. Used
CD...$3.99
Herbie Hancock is certainly Takin Off at this point in his career – stepping into the limelight with an excellent batch of soul jazz tunes, including the first recording of his classic "Watermelon Man", the one track that probably put all his kids through school! Although that one ... CD

Headhunters
Columbia, 1974. Used
CD...$5.99 (LP...$39.99, LP...$35.99)
A seminal jazz funk session of the 70s – Herbie Hancock's legendary meeting with The Headhunters, and a killer batch of tunes that really gave the combo their name! Herbie's playing a wide range of keys here – including Fender Rhodes, clavinet, and Arp – but almost even better is ... CD