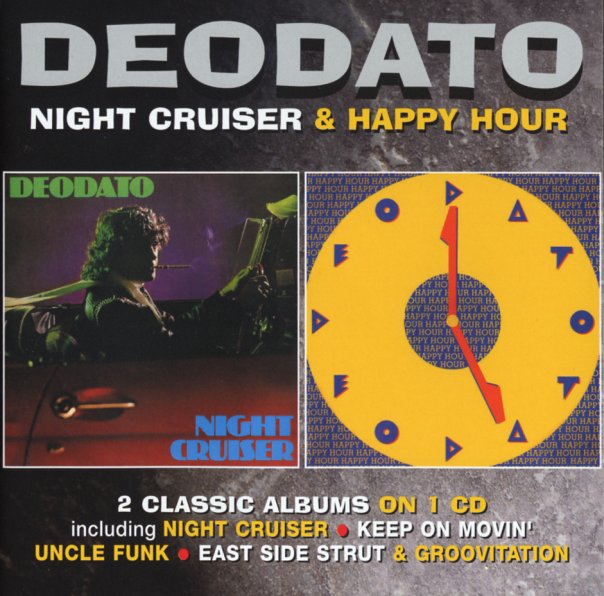 A pair of early 80s gems from this Brazilian keyboard legend – back to back on a single CD! Night Cruiser is a key record in Deodato's move from funky jazz in the 70s to modern soul in the 80s – and one that showcases the best of his talents in both genres! The approach here is more tightly arranged and produced than that of his earlier CTI sides – but in a mode that's still plenty nice to our ears – as Deodato's uncanny sense of rhythm and timing is still very firmly in place, making the set way way more than just a smooth jazz album – and pushing it strongly into the realm of soulful spacey fusion! There's some really great tracks on the set – like the amazing "Skatin", a sweet keyboard number that's a perfect roller skating jam (in case you couldn't guess from the title) – plus "Love Magic", "Uncle Funk", "East Side Strut", and "Night Cruiser". Happy Hour is a classic from Deodato's soul-based years with a nice little R&B-inspired groove! Happy Hour was done at a time when Deodato was really getting into a lot of modern soul production and arranging work with other groups – and here, he tries his hand wonderfully at the style himself – transforming his 70s jazz funk groove into a tightly snapping 80s soul approach! Most tracks on the set feature vocals – by singers who include Kelly Barretto, Eban Kelly, and Candi Staton – but the instrumentation behind them is still plenty jazzy too, thanks to some nice work by Deodato on Fender Rhodes, mini moog, Arp, and other keyboards. Titles include "I Never Get Enough", "Keep On Movin", "Happy Hour", "Just This One Night", "Tears Of A Clown", "Sweet Magic", and "Keep It In The Family". CD features two bonus tracks – "Uncle Funk (7" mix)" and "Keep On Movin (7" mix)".  © 1996-2021, Dusty Groove, Inc.

Complete Warner Brothers/Seven Arts Recordings (Oh Good Grief/Eclectic/Alma-Ville/bonus tracks)
Warner/Omnivore, 1968/1969. New Copy 2 CDs
CD...$24.99 25.98
A trio of wonderful records – plus rare bonus tracks too! First up is the classic Oh Good Grief – one of the coolest, grooviest albums that pianist Vince Guaraldi ever recorded – a set that's got the same Peanuts theme as his earlier dates for Fantasy Records, but which also ... CD

Someday
Warner (Italy), 2020. New Copy
CD...$9.99
A very groovy record from Italian trumpet legend Fabrizo Bosso – one that features a group referred to as his Spiritual Trio, but a combo that's maybe got more of a soul jazz vibe overall – as the lineup features Alberto Marsico on organ and Alessandro Mnetto on drums! The spare format ... CD