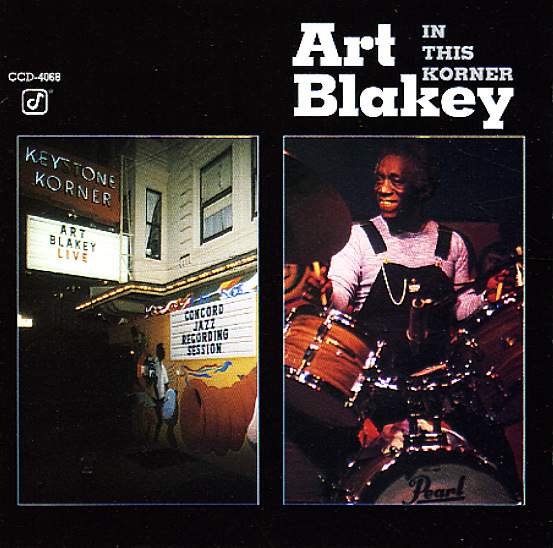 In This Korner (with bonus track)

Art Blakey at the Keystone Korner – really rattling the rafters with a great lineup that includes Bobby Watson on alto sax, David Schnitter on tenor, and Valery Ponomarev on trumpet! Although the Shorter/Morgan lineup is always hailed as one of Blakey's best, we're also pretty partial to this great late 70s stretch of The Jazz Messengers – as it shows some wonderful early flowering of Watson's alto, and his songwriting abilities; Ponomarev's well-blown trumpet lines; and Schnitter's crisp, sharp lines on tenor – always carved out with a great depth of feeling. Add to the mix some great piano from James Williams, and bass from Dennis Irwin, and you've got a great lineup next to Blakey's drums – all working together in a rough-edged, hard soul space on tracks that include "Pamela", "Unlimited", "Dark Side Light Side", "Blues For Two", and "In This Korner". CD also features the bonus track "1977 AD".  © 1996-2023, Dusty Groove, Inc.
(Tray card has a light stain along one edge – booklet and disc are both great.)

Live – Olympia 13 May 1961 Part 1
Trema/Sony (France), 1961. Used
CD...$6.99 13.99
Excellent lost live work by Art Blakey – playing here with one of the best-ever versions of the Jazz Messengers! The frontline is held down by Wayne Shorter, Bobby Timmons, and Lee Morgan – the firey trio who put Blakey's group on the map as one of the best-ever hardbop ensembles of ... CD

Big Beat
Blue Note, 1960. Used
CD...$8.99
One of the greatest Art Blakey Blue Note sessions of all time – and perhaps one of the greatest to realize the genius of the Jazz Messengers lineup that included Lee Morgan on trumpet, Wayne Shorter on tenor, and Bobby Timmons on piano! The trio of young talents are at the height of their ... CD