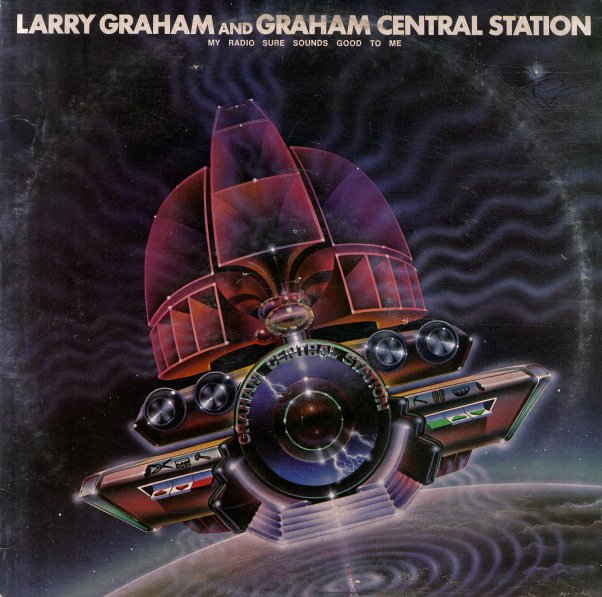 My Radio Sure Sounds Good To Me

Larry Graham's opening his sound up a fair bit for this one – bringing in a bit more of a rock influence than before, and letting the guitars fly all over the tunes! The style's one that's almost got a bit of a pre-Prince influence – more tightly poppy in the construction of the soul, and with a good crossover sound that might have earned Graham some of the "radio" in the title. Tracks include the tightly stepping groover "Is It Love", which has a great west coast slow funk approach, the P-Funky "Are You Happy", and the jazzy "Turn It Out", which has some particularly nice bass work. Other tracks include "Pow", "Boogie Witcha Baby", and "Mr Friend".  © 1996-2021, Dusty Groove, Inc.
(Includes the printed inner sleeve. Cover has some edge wear, a promo stamp, a small sticker spot and a lightly bent corner.)

Pass It On
Warner, 1976. Very Good
LP...$4.99
The Staple Singers and Curtis Mayfield – working together here in a very Curtom groove! This great little set picks off where the group's work on the Let's Do It Again soundtrack left off – taking The Staples far past their Memphis sound of the Stax years, into a hipper, more adult ... LP, Vinyl record album

Rose Royce Greatest Hits
Whitfield/Warner, Late 70s. Near Mint-
LP...$14.99
You know, these guys were so big that we sometimes forget how great they really were. This compilation's a great reminder, and it's filled with some killer 70's soul tracks like the totally sublime original version of "Love Don't Live Here Any More", a cut that still sends shivers down ... LP, Vinyl record album

1999
Warner, 1982. Very Good+ 2LP
LP...$49.99
The record that forever put Prince on the map – a legendary set that took him from being an under-appreciated soul singer to a lasting pop music legend! Prince had been around for a few years before 1999 – but the double-length set was the first to really win over the masses to his ... LP, Vinyl record album

Stand On The Positive Side
Warner, 1977. Near Mint-
LP...$4.99
One of Kelly's last records of the 70s – a bit smoother than some of his earlier work, but still quite strong overall, with some excellent vocals on most tracks. Gene Page handled the arrangements and production – and he gives Kelly some nice backgrounds to work with, ones that have a ... LP, Vinyl record album