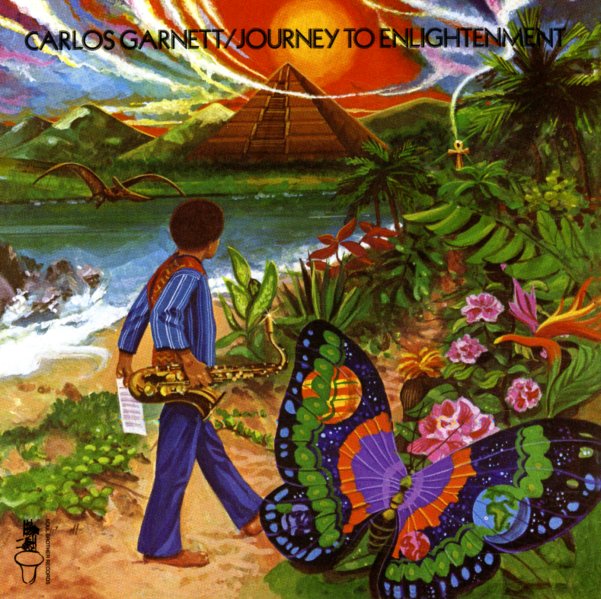 A stone 70s classic from reedman Carlos Garnett – and a set that's every bit as righteous as you'd guess from the cover and the title! Garnett really soars to the heavens here – blowing a mixture of different instruments in a setting that takes off from his classic Black Love album, but which is almost even headier overall! Garnett vocalizes on some of the tracks – often working alongside singer Ayodele Jenkins, in a mode that sets things up with these righteous lyrics – then lets the instrumental passages really take over, and express the message in an even deeper way. The core group is nice and tight – with keyboards from Hubert Eaves, guitar from Reggie Lucas, bass from Anthony Jackson and drums from Howard King – plus extra percussion from Charles Pulliam and Neil Clarke – both of whom really fill in the music with lots of complicated rhythmic elements. Titles include the stunning groover "Chana" – plus "Journey To Enlightenment", "Love Flower", "Caribbean Sun", and "Let Us Go To Higher Heights".  © 1996-2022, Dusty Groove, Inc.

Let This Melody Ring On
Muse/Soul Brother (UK), 1975. New Copy
CD...$8.99 19.99
Soaring soul from Carlos Garnett – one of the reedman's key 70s sides for the Muse Records label – work we'd rank right up there with the spiritual best of Gary Bartz or Norman Connors at the time! Like both of those contemporaries, Garnett's really reaching for something new in the ... CD

Dance
Stash/Soul Brother (UK), 1988. New Copy
CD...$16.99 19.99
A really fantastic little record – a set that shows a strong evolution of spiritual jazz styles into the 80s! The set was recorded at a time when the jazz underground was really getting a lot of exposure, and was bursting forward with a new sense of hope – a quality that you can really ... CD