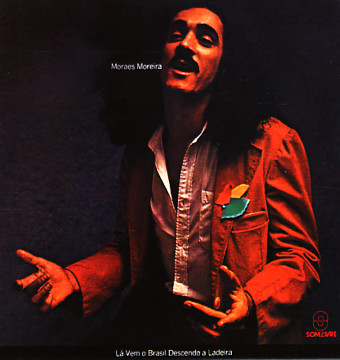 A nice late 70s mix of MPB and samba – put together with the rootsy feel of the latter, but also some of the more creative song styles of the former! There's a tightness here that's unusual for a samba record – especially at the time – and although the instrumentation features lots of festive percussion, chorus vocals, and acoustic guitar, the overall styles shift around a fair bit from song to song. Titles include "La Vem O Brasil Descendo A Ladeira", "Pelas Capitais", "Valentao", "O Prometeu", "Som Moleque", "Choro Pequenino", and "E Assim Pintou Mocambique".  © 1996-2022, Dusty Groove, Inc.
(Out of print.)

Juca Bom De Camera
Som Livre/Discobertas (Brazil), 1977. Used
CD...$11.99
Juca Chaves relaxes in bed on the cover, but he's actually sounding a bit more formal throughout the album – working with great arrangements from Radames Gnatalli, always heavy on woodwinds – and with a sophisticated style that brings a lot to his music. The clarinets and other ... CD