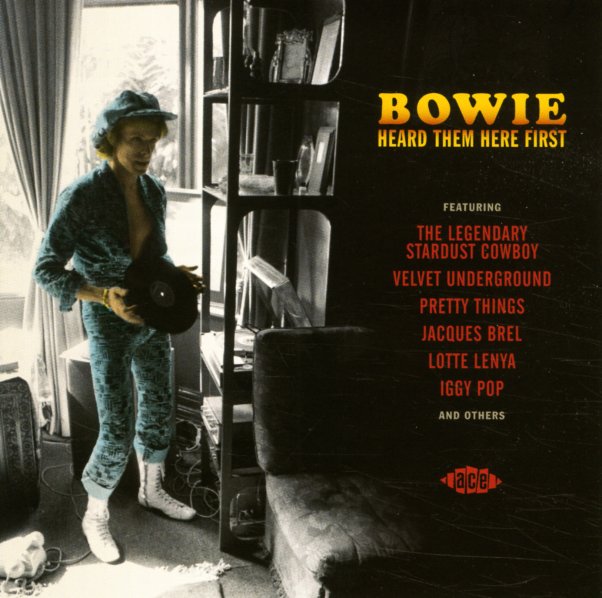 The genius of Ziggy Stardust didn't just spring out of the blue – as David Bowie spent years listening to other music by a range of different artists – engaging them, supporting them, and absorbing them in the process – all to weave into the rich tapestry that became his own musical legacy! Bowie famously covered 60s tunes on his Pin Ups album, and did others' tracks on some other studio sides as well – and his live performances were famous over the years for surprising remakes that offered unabashed homage to those who influenced him – a few of whom would become musical partners as well. This loving package features 24 tracks that were all later performed by Bowie, but delivered here in their original versions – all with detailed notes that trace the lines between the initial takes and the remakes – with the kind of flourish we've come to love from Ace Records. Titles include "Fill Your Heart" by Biff Rose, "It Ain't Easy" by Ron Davies, "Sorry" by The Merseys, "Rosalyn" by The Pretty Things, "Dancing In The Street" by Martha & The Vandellas, "Nite Flights" by The Walker Brothers, "Alabama Song" by Lotte Lenya & The Three Admirals, "Kingdom Come" by Tom Verlaine, "Where Have All The Good Times Gone" by The Kinks, "White Light White Heat" by The Velvet Underground, "Louie Go Home" by Paul Revere & The Raiders, "If There Is Something" by Roxy Music, "Criminal World" by Metro, "Amsterdam" by Jacques Brel, "Wild Is The Wind" by Johnny Mathis, "I Took A Trip On A Gemini Space Ship" by The Legendary Stardust Cowboy, and "Pablo Picasso" by The Modern Lovers.  © 1996-2021, Dusty Groove, Inc.