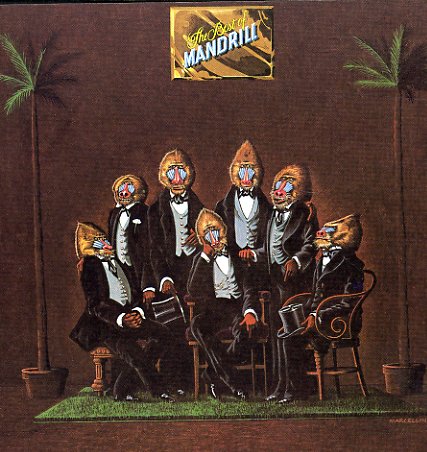 A tight little "best of" set from Mandrill – featuring a great batch of tracks from their famous funky albums for Polydor! Titles include "Symphonic Revolutions", "Hang Loose", "Children Of The Sun", "Mandrill", "Ape Is High", "Fencewalk", "Cohelo", "Mango Meat", and many more! Nice and funky – with some good LA Latin touches!  © 1996-2022, Dusty Groove, Inc.
(Cover has some ring and edge wear.)

Mandrill
Polydor, 1970. Very Good+ Gatefold
LP...$24.99 (CD...$11.99)
A masterpiece of freeform funk from Mandrill – New York group at the start of the 70s, but one who work here with the best longform jamming styles of the Bay Area scene! The combo draw equal influence from jazz, funk, soul, and Latin – using all elements in a unique hybrid that's all ... LP, Vinyl record album

Mandrilland
Poydor, 1974. Very Good 2LP Gatefold
LP...$19.99
A great 2 LP set of funky grooves by Mandrill, and one of the last records they recorded for Polydor! The extended length of the set gives the band a chance to explore all the elements of their music – from jazz to funk to soul and Latin – and the playing is quite tight, without the ... LP, Vinyl record album

For The Sake Of Love
Polydor, 1978. Near Mint-
LP...$11.99
One of our favorite Isaac Hayes albums from the post-Stax years – a wonderful late 70s set that has the man returning strongly to the mellow roots of his early solo years! Ike sounded great on his disco tracks at the time – but we really love his mature, laidback way of laying down a ... LP, Vinyl record album