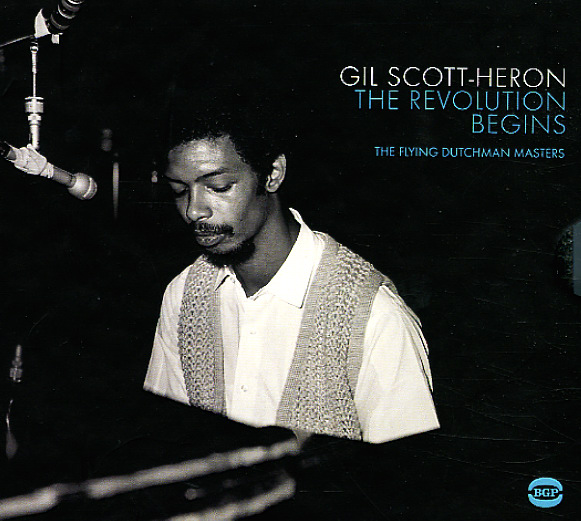 Gil Scott-Heron at his early best and most revolutionary – circa Small Talk At 125th And Lenox, Pieces Of Man and Free Will, plus a host of rare and unreleased material – the complete Flying Dutchman Masters in a masterfully compiled anthology! Rather than simply collecting the original Flying Dutchman albums into a box set, BGP does a terrific job here of organizing it by style. Disc One (Songs) focuses on the soul-based songcraft – while Disc Two (Poetry, Jazz & Blues) features the strident jazzy poetry that inspired most hip hop and spoken word to come. Disc Three features alternate takes and rarities – all of which have never been officially released before now! The set includes every recording that Gil made for Flying Dutchman that's known to exist – and if you're keeping tally, that's all of the tracks from the above-named classic albums – plus the great "Artificialness" from Pretty Purdie's Stand By Me record with Gil on vocals – and the surviving alternate takes. Even if you have all of the original albums, the set is worth picking up for the bonus material and the thick, nicely done booklet of notes and photo – which really adds some top notch historical perspective. 51 tracks on 3CDs: "Lady Day And John Coltrane", "Home Is Where The Hatred Is", "Whitey On The Moon", "Free Will", "Pieces Of Man", "Brother", "Ain't No New Thing", "The Needle's Eye", "The Get Out OF The Ghetto Blues", "Evolution (And Flashback)", "Billy Green Is Dead", "The Middle Of Your Day", "Save The Children", "Who'll Pay Reparations On My Soul?" and many more.  © 1996-2022, Dusty Groove, Inc.