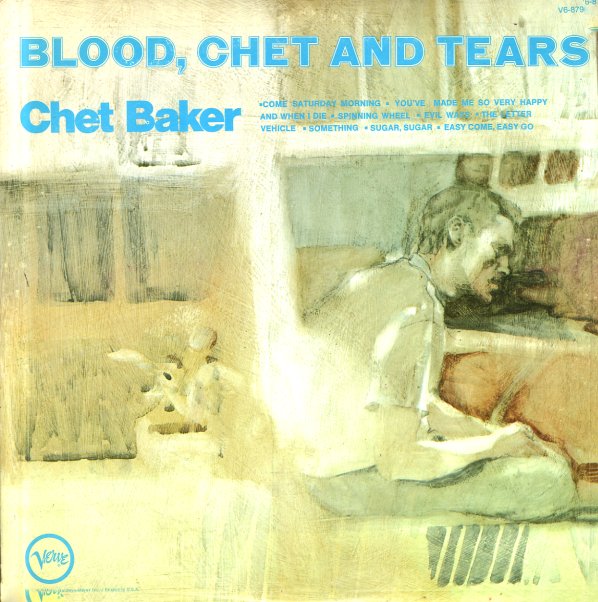 A very unusual set – as Chet Baker plays with larger arrangements from Jerry Styner, which include work from members of the wrecking crew! There's a melancholy feel that really lives up to the image and title of the record – and while most tunes feature just Chet's trumpet in the lead, he also sings on an incredible version of "Come Saturday Morning" – maybe one of the saddest takes on the tune ever, completely heartbreaking! Titles include "Evil Ways", "You've Made Me So Very Happy", "Something", "Spinning Wheel", and "Vehicle".  © 1996-2022, Dusty Groove, Inc.
(Cover has a small cut corner, but this is a great copy overall.)

You Can't Go Home Again
Horizon, 1977. Very Good+ Gatefold
LP...$11.99
A surprisingly great electric session by Chet Baker from the 70s – and a record that's got a bit more force and power than most of his other sets at the time! The format here is a bit tighter and more focused than Baker's recordings for CTI from the period – with electric piano from ... LP, Vinyl record album

She Was Too Good To Me
CTI, 1974. Very Good+ Gatefold
LP...$39.99
A great return to form for Chet Baker – his first record in a number of years away from the studio, and proof that his genius could adapt to just about any setting! The album's got a tight focus that's probably one of the keys to its success – a set of arrangements by Don Sebesky that ... LP, Vinyl record album

Verve Jazz No 17 (aka Very Tall)
Metro/Verve, 1961. Near Mint-
LP...$14.99
Milt Jackson joins the Oscar Peterson Trio – helping the group to hit some great new space with his magical work on vibes! Jackson's got an open, airy feel – an approach that almost lets Peterson punctuate the tunes a bit more with his piano – while the pair get strong rhythmic ... LP, Vinyl record album

Lester Swings
Verve, 1945/1950/1951. Near Mint- 2LP Gatefold
LP...$5.99
Lester Young definitely swings here – on material from a number of different Verve albums of the early 50s – with work from Nat King Cole on piano and Buddy Rich on drums on one session – plus more work from either Hank Jones or John Lewis on piano, and Buddy Rich and Jo Jones on ... LP, Vinyl record album

Award Winner
Verve, 1957. Very Good-
LP...$4.99 (CD...$13.99)
A great little follow-up to the classic West Coast Jazz album recorded by Stan Getz – and like that one, a set to feature some great rhythm accompaniment from the trio of Lou Levy on piano, Stan Levey on drums, and Leroy Vinnegar on bass! The tracks are nice and open – with plenty of ... LP, Vinyl record album

Jazz Perennial – Genius Of Charlie Parker #7
Verve, 1949. Very Good
LP...$9.99
One of our favorite of Verve's "genius of" collections of Charlie Parker's work – largely because it includes some wonderful and oft-overlooked vocal tunes! 4 of the tracks on the set feature Bird blowing with a vocal chorus arranged by Dave Lambert – in a style that shouldn't ... LP, Vinyl record album