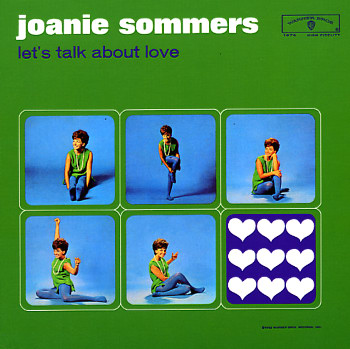 A very powerful little session from Joanie Sommers – and like most of her work from the time, one that's done in a great blend of jazz and mainstream pop! Orchestrations are by Tommy Oliver, and there's plenty of dynamic horn passages to keep things interesting – even on the mellower numbers, which are often some of the best in the set – and feature Joanie's sweeter vocals amidst a darker bank of trombones that dip and turn gently. The more upbeat numbers often feature some nice percussion touches to get the groove going – and titles include "Till There Was You", "Make The Man Love You", "Spring Is Here", "Let's Talk About Love", "After The Lights Go Down Low", "Namely You", "Kiss & Run", and "I'll Never Stop Loving You".  © 1996-2020, Dusty Groove, Inc.
(Mono pressing. Cover has a half split top seam.)