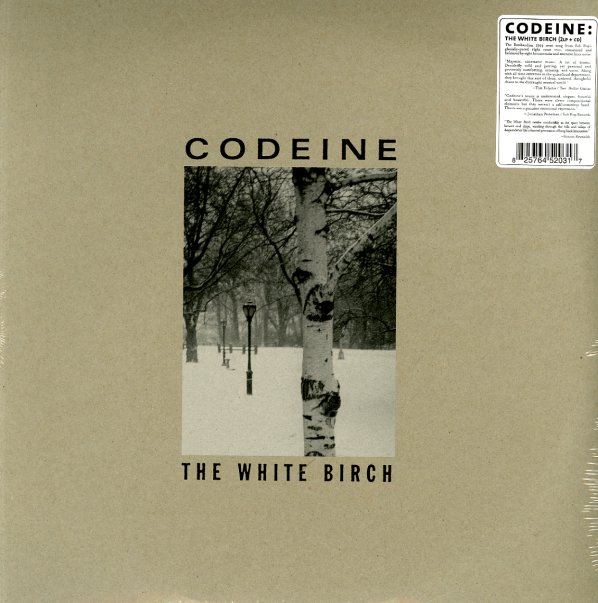 The early 90s swan song for Codeine – and possibly the most fully-realized record in their brief, yet influential run on Sub Pop! The intoxicating haze of John Engle's guitars are as dynamic as ever on White Birch – especially on the slow-building, cathartic opener "Sea" – and the rest of the record is just as impressive. Engle and bassist/vocalist Stephen Immerwahr are joined by drummer Doug Scharin for this final album, who takes over brilliantly for the departed Chris Brokaw. David Grubbs is once again a welcome Codeine contributor – with some guitar work on "Tom" and "Wird". Other tracks include "Vacancy", "Kitchen Light", "Washed Up" and "Smoking Room". This double vinyl version from Numero has a full LP of bonus tracks: "Median (Peel Session)", "Loss Leader (Peel Session)", "Sure Looks That Way (Peel Session)", "Atmosphere", "D (Live)", "Something New", "Ides (Demo)" and "Smoking Room (Demo)". The recordings are restored from the original masters, it's packaged in a beautiful gatefold sleeve, and it includes a an insert with extensive notes. Also includes the full set on CD.  © 1996-2021, Dusty Groove, Inc.

Big Time Operators
Festival/Blank (Australia), 1967. New Copy (reissue)
LP...$21.99 24.98
An Australian group with plenty of soul – a 60s combo that lives in the same R&B and soul-inspired sounds that you'd find on the London scene at the same time! These guys have a mighty tight rhythm section – with drums that really create a nice current of funk on many numbers, and ... LP, Vinyl record album