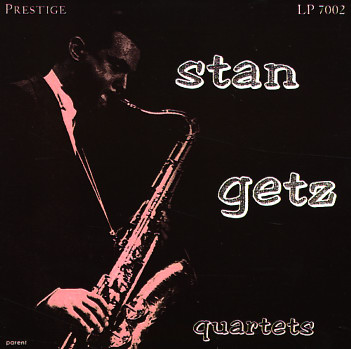 Groundbreaking early work from Stan Getz – a 12" LP that compiles earlier recordings made for Prestige at the end of the 40s – all of which are a perfect exercise in tone, timing, and balance! The setting is simple – quartets with either Al Haig or Tony Aless on piano – but Getz makes magic from the start, flowering the tunes with inventive twists and turns in his horn – not in a simple boppish copycat mode, but in a style that's dripping with soul and feeling all the way through! The record won't hit you over the head as much as some of Stan's later Verve work, but it's almost even better because of that – as even in the simplest of settings, Getz really manages to grab our ear right away, and amaze us with his deft command and personal direction of his instrument! Titles include "Long Island Sound", "Mar-Cia", "Indian Summer", "Crazy Chords", "There's A Small Hotel", "The Lady In Red", "My Old Flame", "What's New", and "Wrap Your Troubles In Dreams". CD features 2 bonus tracks too!  © 1996-2021, Dusty Groove, Inc.
(Out of print.)