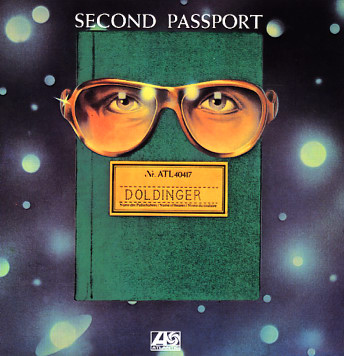 The second album from Klaus Doldinger's Passport – and already the rock-heavy grooves are showing up a bit more than before! Gone is organist Jimmy Jackson, and in his place is keyboardist John Mealing – a really great player who's got a bit of a soaring Brian Auger sort of groove here – one that pushes the whole group right into the stratosphere – propelled by some extra-heavy drum work from Bryan Spring! Doldinger's great as usual on reeds – often inflecting them with a bit of electricity to match the others – and he also shows his strength on the keys by using a bit of moog and electric piano as well. Titles include "Nexus", "The Cat From Katmandu", "Registration O", "Horizon Beyond", and "Mandragota".  © 1996-2021, Dusty Groove, Inc.
(German stereo pressing.)

Looking Thru
Atlantic, 1973. Near Mint-
LP...$14.99
A cosmic leap forward for Passport – a record that's even more keyboard-heavy than some of the group's earlier work, and which stretches out in a spacey sound that's very much in keeping with the cover! The keys here are handled by (yet again) another new player in the group – Kristian ... LP, Vinyl record album

Infinity Machine
Atco, 1976. Near Mint-
LP...$5.99
The title's an apt one here – because the Passport groove of the 70s just seems to go on and on – working with machine-like clockwork, at a pace of at least 2 records a year for many years – without any dip in quality of performance or imagination! As with other Passport records, ... LP, Vinyl record album