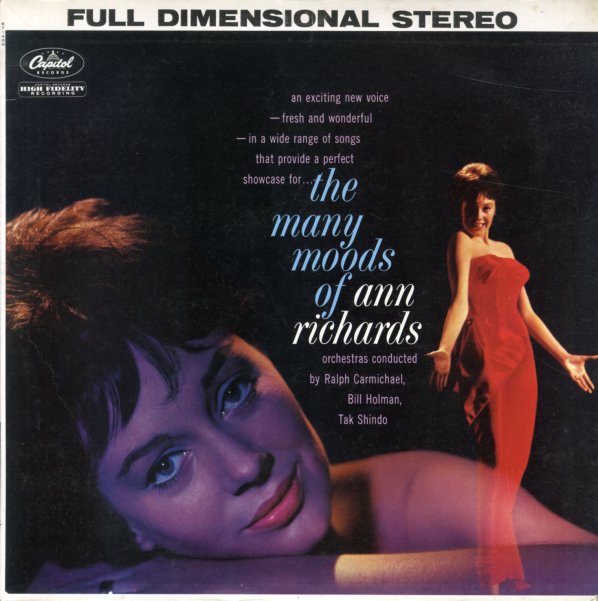 Many Moods Of Ann Richards

Quite possibly the greatest album ever from Kenton vocalist Ann Richards – and a set that really helps her break into some new territory too! The set's definitely got the many moods implied in the title – thanks to arrangements from Ralph Carmichael, Bill Holman, and Tak Shindo – all of whom do a good job of pushing Ann past the standard torchy female singer styles of the time – especially Shindo, who brings in a nice touch of the exotic! Richards has a great sound – one that's clearly inherited from June Christy, but in the best possible way – and titles include "Something's Coming", "I'm Late", "Lazy Afternoon", "By Myself", "I'm Gonna Laugh", and "Where Did You Go" – a nice vocal take on "Jordu"!  © 1996-2022, Dusty Groove, Inc.
(Rainbow label stereo pressing.)

I'm Shooting High
Capitol, 1958. Near Mint-
LP...$19.99
Nicely swinging work from vocalist Ann Richards – a singer we first came to know for her work with Stan Kenton, but who's really emerging here as a strong talent with a voice that's all her own! The setting here is more upbeat than some of Ann's other records – with very lively ... LP, Vinyl record album

Time To Swing
Capitol, 1959. Very Good
LP...$2.99
It's time to swing, but with a classy sound throughout – very much the best mix of modes Dakota Staton brought to her key early years at Capitol Records! Backings are by Sid Feller, and are pretty darn jazzy throughout – more so than some of Sid's other work of the time – a ... LP, Vinyl record album

If I Ruled The World – Songs For The Jet Set
Columbia, Mid 60s. Near Mint-
LP...$4.99
One of Tony Bennett's most fantastic albums from the 60s, and a record that features some nice jazzy arrangements that push past the usual heavy studio ones. The album includes a great reading of "Samba Do Aviao" with backing by Carlos Lyra, Helcio Milito, and Al Cohn – plus "F ... LP, Vinyl record album