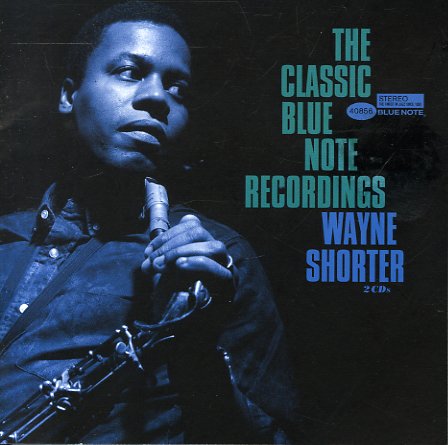 2CDs worth of Wayne Shorter's Blue Note recordings – what more could a jazz fan ask for? Without a doubt, Shorter ranks among the most significant jazz composers for small ensembles of the modern era, and it's easy to see why on these recordings, where his vision was fully formed, but that doesn't take away from appreciation of his skill as a soloist, weaving beautiful, intricate lines. As you might imagine, the sidemen here reads like a roster of the most important jazzmen of the age, and their playing here is stellar, including Lee Morgan, Freddie Hubbard, McCoy Tyner, Herbie Hancock, Ron Carter, Elvin Jones and Tony Williams, with the tracks pulled from LPs like Speak No Evil, Night Dreamer and Adam's Apple among others. The second disc of the set focuses on his playing as a in others' groups, with a nice chunk devoted to the Jazz Messengers. 22 trcks in all, including 'Black Nile", "Yes Or No", "Speak No Evil", "Infant Eyes", "Angola", "Etcetera", "Adam's Apple", "Footprints", "The Chess Players", "Ping Pong", "Children Of The Night" and "Nefertiti".  © 1996-2023, Dusty Groove, Inc.

Adam's Apple (RVG remaster edition)
Blue Note, 1966. Used
CD...$8.99
An incredible album – one of our favorite Blue Notes ever! Despite the fact that the album's a spare quartet session, the record is one of Wayne Shorter's richest – and features his gutsy young tenor soloing insanely with a rhythmically intense combo that includes Herbie Hancock on ... CD

Etcetera
Blue Note, 1965. Used
CD...$6.99 11.99
Don't let the title fool you, as the album's hardly an "etcetera" – not some run-on work from Wayne Shorter, but a real lost cooker from his 60s Blue Note years! The record's got a very sharp-edged quartet sound – a bit modern and edgey at times, with sharp tenor lines from ... CD

Ju Ju (RVG remaster edition)
Blue Note, 1964. Used
CD...$6.99
Genius, pure genius! Like all of Wayne Shorter's Blue Note sessions from the mid 60s, this album's a beautiful blend of hard bop ideas with a modern spiritual soulful consciousness – as important in its own way as Coltrane's work of the time – an incredible precursor for sounds from ... CD