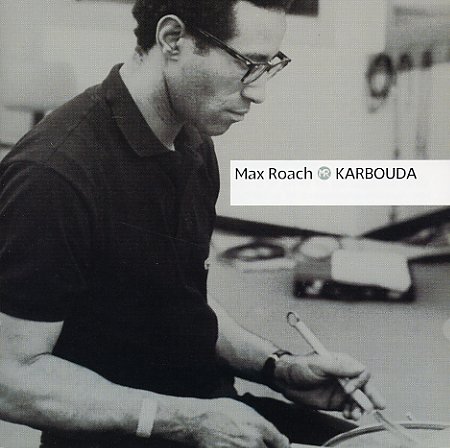 Karbouda (aka Again, aka Mop Mop)

Some of the hippest Max Roach work of the 60s – issued here professionally for the first time in years! The first tracks in the set are from a concert in Paris, with Max's group that included Tommy & Stanley Turrentine, as well as Julian Priester. The tracks are long and open-ended – with an approach that you wouldn't find on the group's Mercury sides from the time – and two Roach originals in particular – "Kardouba" and "Stop Motion" – are especially great, and have the Turrentines stretching out in a soul jazz searching mode that's quite different than their Blue Note work. This approach is continued strongly in the set – which features Clifford Jordan on tenor, Coleridge Parkinson on piano, and Abbey Lincoln on some vocals – all recorded at an unknown location in 1961. Again, the Roach originals – especially "This Night Mountain" and "Ceciliana" – are the tunes to watch – but there's also some great other work, including "Jordu", "Who Will Buy", and "Love For Sale".  © 1996-2022, Dusty Groove, Inc.
(Out of print and still sealed.)

Live In Antibes Vol 1 & 2
BYG/Fuel 2000, Late 60s. Used 2 CDs
CD...$9.99
A seminal live set from tenorist Archie Shepp – and some of his freest, least-structured material ever! Shepp's still a righteous force here on his horn, but there also seems to be equal emphasis on the contributions of all members of the group – woven together in a really rich ... CD