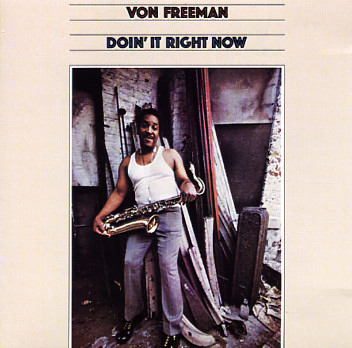 A classic "discovery" of tenor saxophonist Von Freeman – one that was already relatively late in his career, but a key appearance on Atlantic under the auspices of Roland Kirk! The setting here is as loose and laidback as Von needs to really do his thing – backing by a trio that features fellow Chicagoan John Young on piano, plus Sam Jones on bass and Jimmy Cobb on drums – all hanging back nicely to let Freeman dominate the set on tenor. The album's noteworthy for its inclusion of a few original tunes by Von – "White Sand", "Portrait Of John Young", "Doin It Right Now", "Brother George", and "Catnap" – all of which mark a nice contrast from some of the more traditional standards that show up on other Freeman albums of the 70s.  © 1996-2022, Dusty Groove, Inc.
(Out of print. Barcode has a cutout hole.)

Great Divide
Koch/Premonition, 2004. Used
CD...$5.99
A rich laidback set from one of Chicago's resident legends – tenor Von Freeman! Freeman was in his early 80s by the time this set was recorded, and his warm tone sounds as good to our ears as it did on recordings from decades ago. Von really lets loose in spots, too, such as on the fiery ... CD

All This – Ken Peplowski Lives In The UK Vol 1
Koch, 1999. Used
CD...$4.99
Ken Peplowski on clarinet and tenor saxophone, John Pierce on piano, Dave Green on bass, and Martin Drew on drums. CD