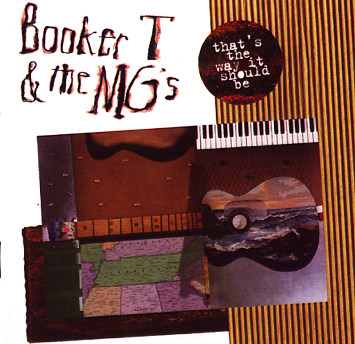 That's The Way It Should Be

A surprising mid 90s comeback for Booker T & The MGs – a session that reunites Booker T on Hammond, Steve Cropper on guitar, and Donald Duck Dunn on bass – with additional drums from either Steve Jordan or James Gadson! The sound is somewhat in the classic Stax mode of years back – in that most tracks are spare instrumentals with lots of lines from the organ and guitar – spun out over rhythms that are never too complicated, and which have the stepping soul instrumental quality of the Memphis scene from years back. But the sound is also somewhat different too – produced with a bit more "room" than in the Stax days, and with a sound on the organ that's not as low-end as before – a bit brighter overall. Still, the record's a lot better than you might expect for the time – a nicely restrained effort that tries to hearken back to the old days. Titles include "I Can't Stand The Rain", "Camel Ride", "Let's Wait Awhile", "Gotta Serve Somebody", "Slip Slidin", "Mo Greens", and "Just My Imagination".  © 1996-2022, Dusty Groove, Inc.
(Out of print.)

Love Talk
Amherst, 1991. Used
CD...$6.99
Unusual later work from this famous group – still very strong vocally, and working with some slightly modern production touches. Titles include "I Don't Need This", "Love Talk", "You're My Woman You're My Lady", "Always On My Mind", "Hits ... CD