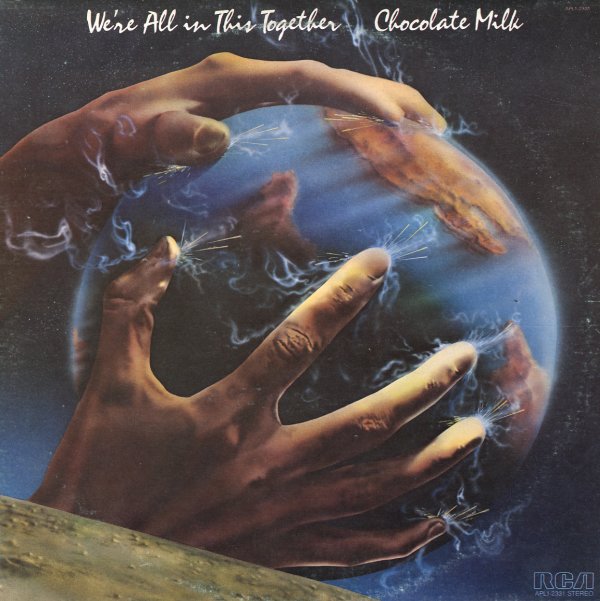 We're All In This Together

An overlooked funky classic from Chocolate Milk – and a set that still preserves the tight grooves of the group's earliest work! Allan Toussaint is still on hand this time around to help with both production and songwriting – and his touches can definitely be felt on the record – a tight funky undercurrent that's definitely rooted in New Orleans soul, but has some warmer, more contemporary elements too – just like that mid 70s change Toussaint was bringing to his own grooves. Standout cuts include the funky numbers "Grand Theft" and "America" – plus the groover "Girl Callin" – although there's some mellower numbers we like pretty darn well too. Other tracks include "Help Me Find The Road", "Thinking Of You", "That's The Way She Loves", and "Fertility".  © 1996-2022, Dusty Groove, Inc.
(Includes the printed inner sleeve. Cover has some ring and edge wear and a tiny split in the bottom seam.)

Soft Lights Sweet Music
RCA, 1980. Near Mint-
LP...$4.99
The only RCA album from Enchantment – and a great little set that has the group stretching out from their earlier records on United Artists! The groove here is still awash in the great harmonies we've always loved from the group – and production is by Don Davis, who always has a great ... LP, Vinyl record album

Euphrates River (Pickwick)
RCA/Pickwick, 1974. Near Mint-
LP...$4.99
Although the Main Ingredient were best known for their early 70's singles, this album from '74 is a wonderfully complex batch of tunes that shows that the group were taking a cue from some of their hipper contemporaries, and pushing past a stock hit formula. Bert DeCoteaux was still arranging, but ... LP, Vinyl record album

Happy & In Love
RCA, 1971. Sealed
LP...$14.99
A great second chapter for The Shirelles – hardly the girl group pop they cut in the 60s, and instead a more righteous soul style for the 70s – in a mode that's like Honey Cone or Three Degrees! The backings are nice and soulful – almost funky at times – with arrangements ... LP, Vinyl record album