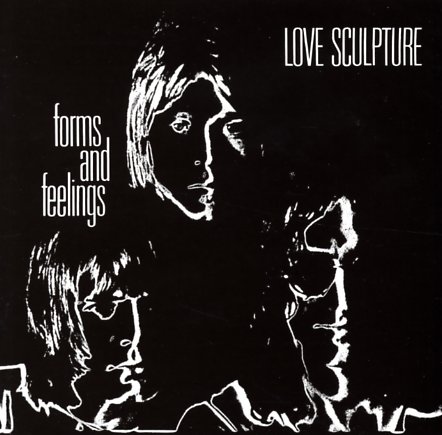 Wonderful work from Love Sculpture – a heavy British trio from the end of the 60s – and one that features a young Dave Edmunds on guitar! There's a slight bluesy undercurrent in Dave's style, but the music also has that tightly compressed sound that would emerge more strongly during his hit solo years – yet which is presented here with some very nice rough edges. Songwriting is especially great – a fresh approach to territory that was beginning to sound a bit stale in the hands of some of the group's contemporaries – presented here with a clean, lean sound that's almost a precursor to power pop at points, yet which still has a heavier late 60s rock feel. Titles include "In The Land Of The Few", "Seagull", "People People", "Mars", "Sabre Dance", "Farandole", and "You Can't Catch Me".  © 1996-2021, Dusty Groove, Inc.
(70s UK pressing on EMI/Parlophone. Cover is wavy from moisture, with a spot of gloss separation at the top left corner.)

East Meets West – The Famous Hits Of The Beach Boys/The Famous Hits Of the Four Seasons
Parrot, 1964. Near Mint-
LP...$19.99
American 60s hits, completely recast by the orchestra of Andrew Oldham – a cat you might know best as the manager of the Rolling Stones, but who also has a great way with a groove in the studio! The style is bouncy Brit pop of the 60s – which has these American songs really coming ... LP, Vinyl record album