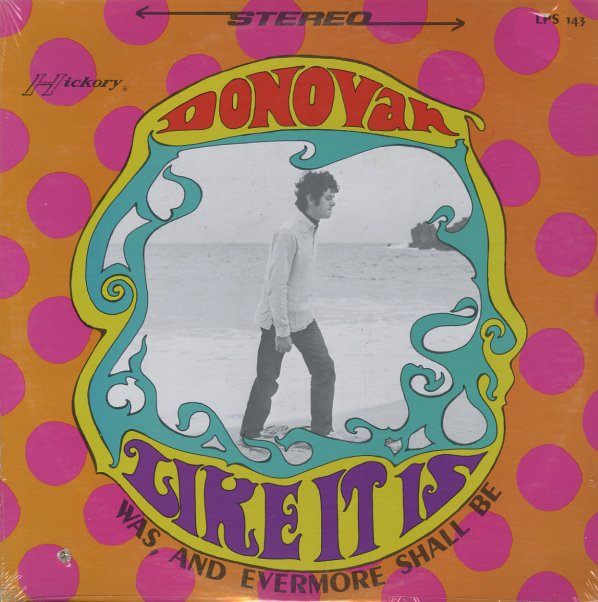 (Cover has a small split on the top seam, a cutout hole, and some surface wear.)

Hear Me Now
Janus, Mid 60s. Very Good+
LP...$3.99
An American release from the early 70s, but one that features material from right at the start of Donovan's career – a time when it was mostly just his voice and acoustic guitar, on titles that include "The Ballad Of Geraldine", "Do You hear Me Now", "Cuttin Out" ... LP, Vinyl record album

Gift From A Flower To A Garden (Epic)
Epic, 1967. Very Good- 2LP Box Set
LP...$9.99
One of the trippiest albums ever from Donovan, as you might guess from the title – a double-length gem that's filled with wonderfully groovy tunes! The set was cut during Donovan's killer years with producer Mickie Most in the late 60s – and it's got an instrumental feel that's even ... LP, Vinyl record album

Donovan In Concert
Epic, 1967. Very Good
LP...$3.99
A wonderful complement to the Donovan studio albums from the late 60s – a well-recorded live date from the US. The style of the tunes is a bit different than some of their more famous album and single versions – with a relaxed approach to the work that leans a bit more on some of ... LP, Vinyl record album

Wear Your Love Like Heaven
Epic, 1967. Very Good
LP...$8.99
One of Donovan's greatest albums! This LP is a perfect blend of pop psychedelia – complicated little songs that sum more in a short space than some of Donovan's contemporaries could do in a single album side. Nearly every cut on here is a tiny little 3 minute gem – and tunes include ... LP, Vinyl record album

Sunshine Superman
Epic, 1966. Very Good-
LP...$11.99
One of the grooviest albums of the 60s – and the first album in Donovan's legendary run with producer Mickie Most! The sound here is light years away from the heavy Dylan of Donovan's first recordings – and is steeped in eastern influences that sparkle in both the songwriting and ... LP, Vinyl record album

Mellow Yellow
Epic, 1967. Very Good
LP...$13.99
Easily one of Donovan's most successful albums – but also a brilliant blend of folk and jazz that forged a bold new sound in the 60s! Part of the strength of the set comes from arranger John Cameron – an artist that we love for his jazz and easy work of the late 60s, and who's working ... LP, Vinyl record album