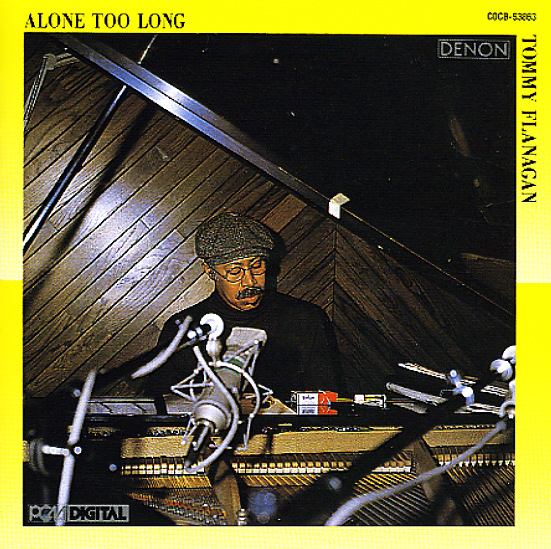 Also available
Tommy Flanagan — Alone Too Long ... CD 9.99
Warm and lyrical solo piano work from Tommy Flanagan – a Japanese only session from the mid 70s, and one of the first of a long run of well-produced dates that Flanagan would do for that market! The format's even more intimate than the relaxed setting of some of Tommy's American dates of the time – and there's some soulfully ringing tones from the piano throughout, that beautiful balance that Flangan always brought to his best recordings. The sound is excellent – and titles include "Like A Butterfly", "Alone Too Long", "Parisian Thorougfare", "Strollin", and "Maybe September".  © 1996-2023, Dusty Groove, Inc.
(Out of print.)

Alone Too Long
Denon (Japan), 1977. Used
CD...$9.99
Warm and lyrical solo piano work from Tommy Flanagan – a Japanese only session from the mid 70s, and one of the first of a long run of well-produced dates that Flanagan would do for that market! The format's even more intimate than the relaxed setting of some of Tommy's American dates of the ... CD

Gratitude
Denon (Japan), 1986. Used
CD...$8.99
A great later swinger from Phil Woods – a tight acoustic session recorded for the Denon label in Japan, and put together with a really classic feel overall! Wood's alto is amazing – sharp and fluid right from the start, and set up with a crack group that includes Tom Harrell on trumpet ... CD

Short Stories
Denon (Japan), 1987. Used
CD...$8.99
A great Denon date from saxophonist Bob Berg – recorded at a point when he was really coming into his own as a leader, and using some fusion elements a bit more confidently than before! The session balances Bob's work on tenor and soprano with work from Don Grolnick on organ and keyboards, ... CD

Moonlight In Vermont
Denon (Japan), 1977. Used
CD...$14.99
Beautifully-recorded later work from Sonny Stitt – a record that's got the crispness and poise of his classic work on Roost, with perhaps a bit of the warmer soul he'd picked up in the 70s – yet laid out in a way that's different from some of his American albums too! The set's a ... CD

Legend, The Legacy
Denon (Japan), 1989. Used
CD...$3.99
The Basie Orchestra pays tribute to their departed Count – and the groove here is every bit the sort you'd expect from the ensemble at their height! Frank Foster's in the lead with the group at this point, and he's definitely back in the Basie bag, after stretching out soulfully on his own ... CD