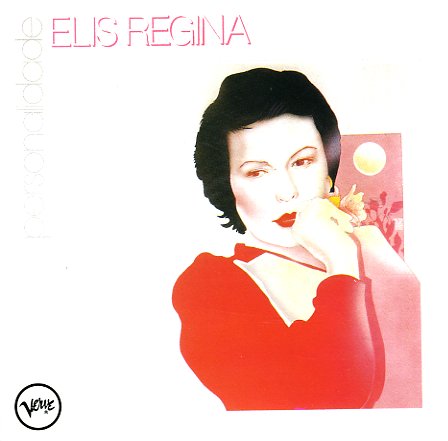 By the mid 70s, Elis Regina had transformed from being a simple and strong bossa singer, into one of Brazil's best-ever singers – with a complicated emotional style that ranges with some of the best work of the 20th century (and we'd include singers like Sinatra, Scott Walker, and Jacques Brel in that territory!) This "best of" set was put together by Elis' longtime compatriot Roberto Menescal, and it features some of the best moments from her massive Philips albums of the early and mid 70s. Titles include "Atras Da Porta", "Mucuripe", "Como Nossos Pas", "Folhas Secas", "Voce", "E Com Esse Que Eu Vou", "Nada Sera Como Antes", and "Madalena".  © 1996-2021, Dusty Groove, Inc.
(Out of print.)

Elis (1980) (aka Vento Do Maio)/Carvalho Costa (CD/DVD box)
Studio Canal (Brazil), 1980. Used CD & DVD
CD...$24.99
An amazing package – one that brings together the album Elis from 1980, in a special box that includes a bonus DVD, and lots of cool other extra bits – including announcements of a show, a program for the show, reproductions of press clippings, 3 buttons, 5 photographs, a pin, a sticker ... CD

Vento De Maio (May Wind)
EMI, 1980. Used
CD...$6.99
A pretty sweet album by Elis – and one of the last she ever did! The arrangements have a bit more of an electric jazz sound than usual – but they actually give her voice a nice sound, and create some nice lush soulful tracks that have a very sweet sound. Cesar Mariano is still on ... CD

Bicho
Philips/Polygram (Brazil), 1977. Used
CD...$8.99
Sweetly jazzy, funky, and soulful work from Caetano Veloso – a great departure from some of his headier work of the early 70s – and proof that he still sounds great, even when in sweetly melodic territory! The album's got some full backings from Perinho Albuquerque, but the sound is ... CD

A Arte De Tom Jobim
Philips, 1960s/1970s. Used
CD...$12.99
An excellent double-length set that brings together some of Antonio Carlos Jobim's best work for the Philips and Verve labels, plus a few other nice rare bits! The set features work from records that were issued under Jobim's own name, plus tracks from records by Elis Regina, Astrud Gilberto, and ... CD

Sinal Fechado
Philips (Brazil), 1974. Used
CD...$16.99
Chico pays tribute to a host of other Brazilian composers – but he manages to make the work entirely his own, thanks to a deeply personal approach! Styles here run the gamut from samba to sophisticated, often handled with slightly jazzy undercurrent – and backings are by Perinho ... CD

Joao
Philips/Polygram (Brazil), 1991. Used
CD...$8.99
A later album by bossa legend Joao Gilberto – but with all the fragile brilliance of his best early work! The album features arrangements by Clare Fischer – the wonderful talent behind some of the best Brazilian-tinged jazz sessions of the 60s and 70s, a perfect accompanist to Joao's ... CD

Araca Azul
Philips/Elemental (Spain), 1972. Used Gatefold
CD...$12.99 (CD...$16.99)
One of the weirdest, wildest albums Caetano Veloso ever recorded – a highly experimental session that shows that his ties with the avant art world were still plenty strong on his return to Brazil! Despite a goofy cheeseball photo of Veloso on the cover in a bikini, the sound on this one is ... CD