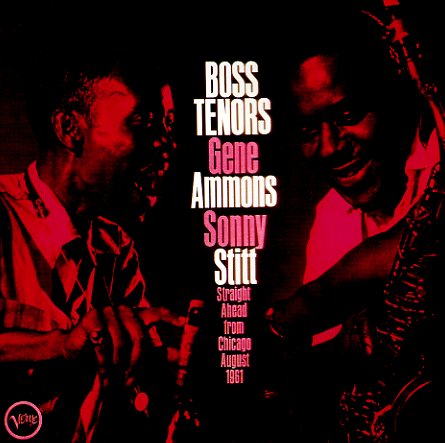 Gene Ammons and Sonny Stitt go head to head in this classic album of tracks that perfectly captures the joy and fury of their live performances from years before! The record was cut in Chicago with a very hard rhythm section that includes John Houston on piano, Charles Williams on bass, and George Brown on drums – and it's way heavier than the usual Verve "meeting of the masters" session, and feels more like a record that should have been issued on Prestige or Argo. Both players are impeccable, and the solos stretch out for a long long very live time. Titles include "Blues Up & Down", "The One Before This", and "Counter Clockwise" – but these guys even groove amazingly on standards like "Autumn Leaves" and "No Greater Love".  © 1996-2021, Dusty Groove, Inc.
(Out of print, BMG music club pressing.)