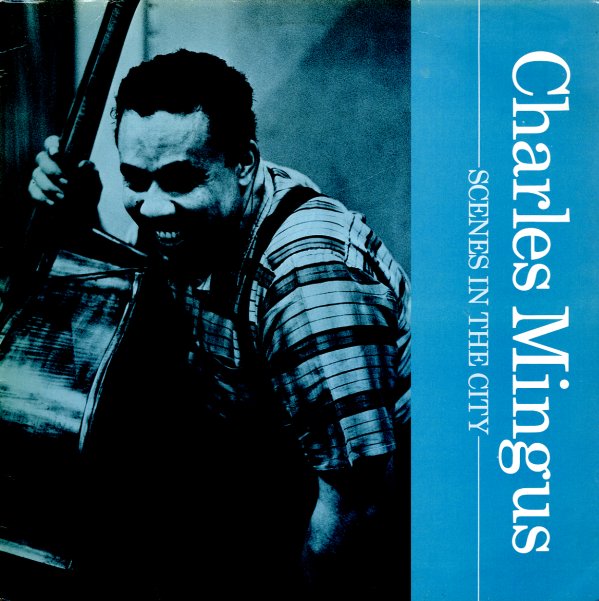 Scenes In The City (aka Modern Jazz Symposium Of Music & Poetry)

A fantastic album – one of our favorite-ever records from Charles Mingus! The album was recorded in the same breath as his legendary works Tijuana Moods, The Clown, and Pithecanthropus Erectus – and it features the same sort of fire and emotion that made those classics so great. The group alone is amazing – with Horace Parlan on piano, Shafi Hadi on alto and tenor, Jimmy Knepper on trombone, and the amazing Clarence (aka Gene) Shaw on trumpet – all getting plenty of room to open up on the album's longer tracks! The work bristles with a sense of imagination and dark energy that Mingus hardly had in his music in later years – and each new tune brings a fresh sense of vision that never fails to astound us! In keeping with the "poetry" title, the album begins with an incredible 12 minute track "Scenes in the City" – which features a long spoken bit written by Langston Hughes about one man's love of jazz and the way that it affects his life in the city – all supported with excellent instrumentation from the group. Other titles are instrumental, and include "Nouroog", "New York Sketchbook", "Slippers", and "Duke's Choice".  © 1996-2022, Dusty Groove, Inc.
(80s UK pressing.)

Round Midnight
Bethlehem, 1956. Very Good+
LP...$24.99
One of the greatest albums ever from west coast pianist Claude Williamson – from the cool image on the cover, right down to the freely swinging grooves on the vinyl! Williamson's working here in trio formation with Red Mitchell on bass and Mel Lewis on drums – mostly on familiar tunes, ... LP, Vinyl record album

Hard Drive (70s pressing)
Bethlehem, 1957. Near Mint-
LP...$14.99
A well-titled set from Art Blakey – considering the hard-driving sound of the group! The album's one of the best from that unusual year of 1957 – almost a "lost" year for Art, when he was working away from Blue Note with a very different lineup of the Jazz Messengers than on ... LP, Vinyl record album