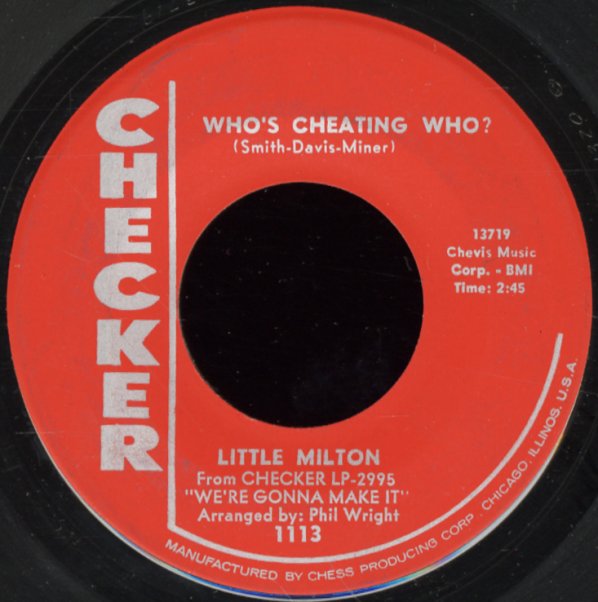 Searching For My Love/Hey Mr DJ
Checker, Mid 60s. Near Mint-
7-inch...$24.99
A killer from Bobby Moore! Sure, he's best known for the classic southern soul number "Searching For My Love" – but the one we die for is "Hey Mr DJ", a slow vamping instrumental with a honking tenor all over the top, and bubbling organ and really heavy drums underneath. ... 7-inch, Vinyl record

Watusi/Wallflower
Checker, Early 60s. Near Mint-
7-inch...$6.99
"Watusi" is a classic groover from The Vibrations – a slowly dancing number with a hard-sock groove, one of the group's best early cuts! "Wallflower" is more uptempo, tighter harmonies and a smoother groove – kind of a sing-song playful number, with raw vocals on ... 7-inch, Vinyl record

Fool On The Hill/So Many Stars
A&M, Mid 60s. Very Good (pic cover)
7-inch...$4.99
Nice nice original pic sleeve of Sergio's hip happenin' version of this classic Beatles track! Sergio and the girls take the tune into a whole new sound – pausing at strange places, letting the melody drift around amidst them, and making the record sound like you've never heard it before! ... 7-inch, Vinyl record

It's A Shame/Together We Can Make Such Sweet Music
VIP, 1969. Very Good
7-inch...$4.99
Wonderful! "It's A Shame" is one of the Spinners' best cuts! It's got a totally groovy hook, great strident arrangements, and a harmony soul feel that goes waaaay over the top! Tough to find on vinyl, too! 7-inch, Vinyl record