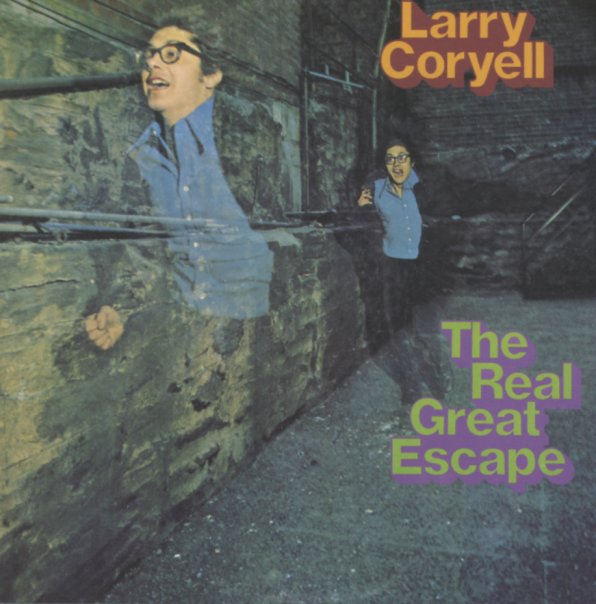 Larry Coryell tries out his vocal chops a bit on this album with his classic group from the early 70s – but the main "voice" on the record is still his wonderfully tight guitar – which has a beautifully sharp sound throughout! When Coryell sings, he almost seems to be doing so through the pickup of a guitar – or a least getting processed via pedals and effects – which gives his singing as much fuzz as his electric instrument – set up in a great combo that features work on tenor and soprano sax from Steve Marcus, and a mixture of piano and Arp from the great Mike Mandel. Titles include "PF Sloan", "The Real Great Escape", "Are You Too Clever", "Love Life's Offering", and "Makes Me Wanna Shout".  © 1996-2022, Dusty Groove, Inc.

Heavy Feel
Wide Hive, 2015. Sealed
LP...$11.99
Larry Coryell's lost none of his genius over the years – and this recent session still has the guitar innovator working with all the best styles we first loved in his initial recordings for Vanguard! Larry's got a tone that can be clear and clean one minute on the electric, then filled with ... LP, Vinyl record album

Places We've Never Been
Vanguard, 1979. Near Mint-
LP...$19.99
Green plays alto sax and piano and is joined by Randy Brecker on trumpet & flugelhorn, Albert Dailey and Ronald Kubelik on piano, Eddie Gomez on bass and Freddie Waits on drums. All of the tracks are originals and they include "East & West", "April Green", "Command ... LP, Vinyl record album

Clark Terry's Big Bad Band Live At The Wichita Jazz Festival 1974
Vanguard, 1975. Near Mint-
LP...$9.99
A crowd-pleasing cooker from Clark Terry – a set recorded live before a very appreciative audience, and in a hipper 70s mode than you'd expect! The album's one of those great jazz efforts that was put together by Ed Bland – who seems to bring a nice sense of bounce, soul, and groove to ... LP, Vinyl record album

Globetrotter
Vanguard, 1977. Sealed
LP...$13.99
The title's a right one, as Terry was one of the world's biggest-selling jazz acts at the time – playing a variety of settings during the 70s, and making a lot more penny than some of his contemporaries. Fortunately, that fame didn't mean that he sold out his talent – because he still ... LP, Vinyl record album

Scavenger
Milestone, 1968. Very Good+
LP...$49.99
One of the best-ever Nat Adderley albums, and a damn funky set of tracks that has a tight soulful feel! The session's got a similar feel to some of the other rare late 60s Milestone albums (like the 2 killers by Bobby Timmons!) – especially in that it's got a group that plays with the ... LP, Vinyl record album