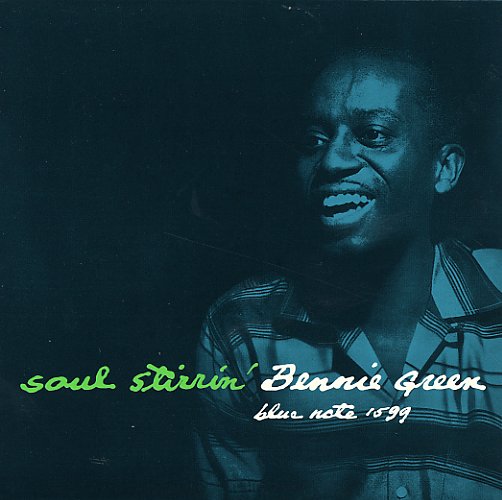 One of the greatest albums ever recorded by hardbop trombone legend Bennie Green – an all-star sextet session that cooks like a mofo! The group features the twin tenors of Billy Root and Gene Ammons (billed just as "Jug" on the session, because of contractual reasons) – and it crackles with electricity from a rhythm section that features Ike Isaacs on bass, Sonny Clark on piano, and Elvin Jones on drums. There's some fantastic tracks on here, including Babs Gonzales' "Lullaby of the Doomed", and a monster jam called "We Wanna Cook", which was once described to us as "all you ever need to have a house party" – to which we wholeheartedly agree! Other tracks include "Black Pearl", "BG Mambo", and "Soul Stirrin" – and the album's one of the heaviest duty Blue Notes from the time! Features a bonus mono take of "Soul Stirrin".  © 1996-2020, Dusty Groove, Inc.
(Out of print Connoisseur pressing. Spine has a thin cutout notch.)