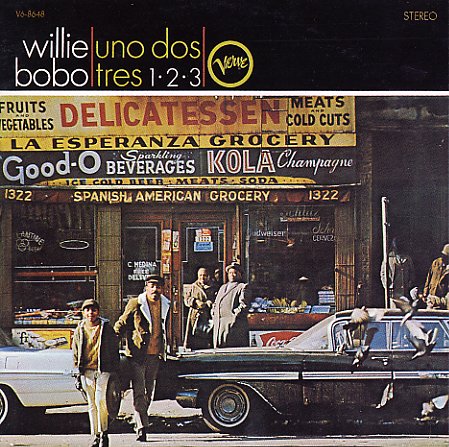 Nice nice reissue of two rare Latin soul albums that Willie Bobo recorded for Verve in the mid 60s! Uno Dos Tres is certainly one of Willie's best-ever albums, and it's paired here with Spanish Grease, which is monsterously hard to find on vinyl. Both records are filled with groovy numbers that hit the good mix of soul and Latin that was coming out of the New York scene at the time. Highlights include the amazing "Fried Neckbones & Some Home Fries" (one of our all-time faves!), plus "Boogaloo In Room 802", "Spanish Grease", "Elation", "Nessa", "I Remember Clifford", "Night Song", and groovy vocal and instrumental takes on "It's Not Unusual". 22 cuts in all, and very nicely packaged!  © 1996-2021, Dusty Groove, Inc.
(Out of print.)