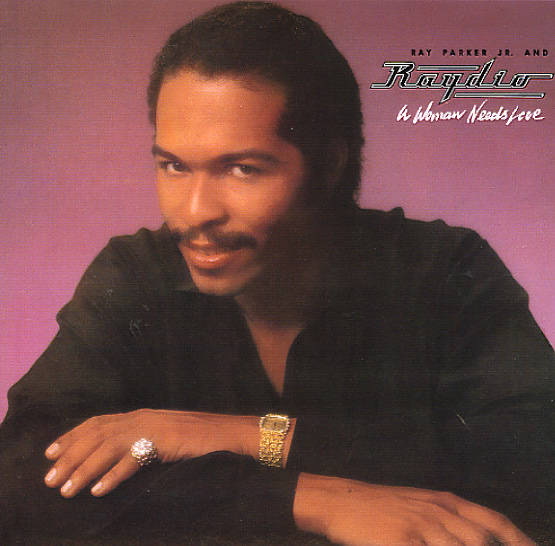 Also available
Ray Parker Jr & Raydio — Woman Needs Love (with bonus tracks) ... CD 9.99
The start of Ray Parker's big hit run of the 80s – a set that has the Raydio group stripped down to just a duo behind Ray, and Parker very firmly out in the lead on vocals! The title hit's a smooth standard that's kept on going for many years – just the kind of cut that crossed Ray over to a big audience that would hang on for most of the decade – but the record still has plenty of the funkier soul touches that bear the Raydio name, including some tight rhythms from drummer Ollie E Brown, who also co-produced part of the set with Ray. Some tunes are a bit softer than before, but never too mellow – and titles include "A Woman Needs Love Just Like You Do", "So Into You", "It's Your Night", "Still In The Groove", "That Old Song", "Old Pro", and "You Can't Fight What You Feel".  © 1996-2022, Dusty Groove, Inc.
(Includes the printed inner sleeve. Cover has a few spots of sticker residue, a name in pen, and light wear. Labels have a name in pen.)

Two Places At The Same Time
Arista, 1980. Very Good+
LP...$5.99
Solid funky work from Ray Parker Jr & Raydio – a set that's lean and focused, and still very much in the earlier Raydio groove! Parker's still a bit away from the spotlight at this point – leaving the band to have the strongest role in the record, which is a great thing, given how ... LP, Vinyl record album

Hot Live & Otherwise
Arista, 1981. Near Mint- 2LP Gatefold
LP...$1.99
Great early 80s work from Dionne Warwick – mostly recorded live, with a slightly looser feel than some of her studio sets of the time! The double-length set features three sides live, and an additional set of studio material – and the live tracks are possibly the greatest in the bunch ... LP, Vinyl record album

Reflections
Arista, 1981. Near Mint-
LP...$39.99
A great little album that's often overshadowed by its hit – the 15 minute "B-Movie", which was sort of an overly-wrought protest piece about how the election of Ronald Reagan in 1980 was going to turn America into a bad b-movie. Not that that track's bad – although its ... LP, Vinyl record album

From South Africa To South Carolina
Arista, 1975. Very Good Gatefold
LP...$19.99
A 70s soul classic – and the closest that Gil Scott-Heron ever came to having a hit! The album's best known for its anthemic classic "Johannesburg" – one of the first popular tunes to really push the cause of a free South Africa – but the whole album's a winner, filled ... LP, Vinyl record album

Face To Face
Arista, 1981. Very Good+
LP...$6.99
Wonderfully solid grooving from GQ – an album issued a few years after their bigger hits, but still plenty great overall! The trio have a great way of laying out a sweet harmony without getting too cloying, nor too poppy – and the best cuts here glide along beautifully in a mellow or ... LP, Vinyl record album

Dionne (Arista)
Arista, 1979. Very Good+
LP...$4.99
One of those great 70s records that really reminds us that, way past Burt Bacharach, Dionne Warwick's a heck of a great soul singer! The album's a bit more polished than some of her other post-Scepter efforts from the decade – yet still comes off quite well, with Dionne really stretching out ... LP, Vinyl record album

No Night So Long
Arista, 1980. Very Good+
LP...$2.99
A key album in Dionne Warwick's career revival at Arista Records – a set that's filled with the kind of fuller sounds and maturing modes that worked quite well for her shifts in styles over the years! Warwick's a bit less fragile than in the Scepter years, but also not trying as hard to be ... LP, Vinyl record album

You Know How To Love Me
Arista, 1979. Very Good+
LP...$19.99
A classic 1979 album from Phyllis Hyman! Hyman was one of the few female singers who started in the pre-disco years and managed to move through the disco years with a good groove – but never get totally swamped by the production styles of the day. She stuck close to her roots as a jazzy ... LP, Vinyl record album