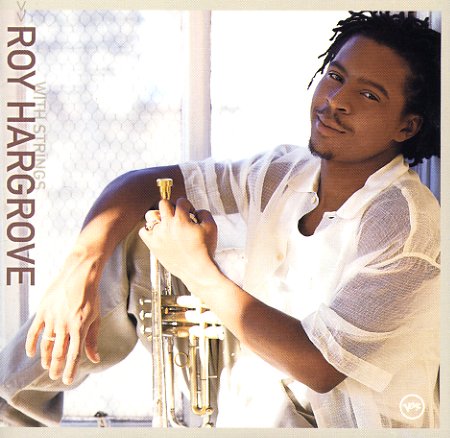 With Strings – Moment To Moment

A quintet with strings session featuring Hargrove on trumpet, Sherman Irby on alto, Larry Willis on piano, Gerald Cannon on bass, and Willie Jones on drums.  © 1996-2021, Dusty Groove, Inc.
(Out of print.)

Emergence
EmArcy, 2009. Used
CD...$9.99
A stunning big band session from trumpeter Roy Hargrove – one that marks his emergence to a whole new level of jazz! The album comes as a real surprise to us – quite different than both Roy's small combo work, and some of his more groove-based records – and although you can hear ... CD

Tour De Force – The Trumpets Of Roy Eldridge, Dizzy Gillespie, & Harry Edison
Verve/Fresh Sound (Spain), 1955. Used
CD...$4.99
A triple-trumpet session with a really wonderful sound – the kind of all-star date that only a label like Verve could have done so well! As you'll guess from the title, the record's a showcase for the three trumpeters in the lead – and the tracks are long, with plenty of space for each ... CD

Modern Jazz Sextet
Verve, 1956. Used
CD...$8.99
That's the Modern Jazz Sextet – not the Modern Jazz Quartet – although the group definitely borrows a bit of energy from the MJQ, and some personnel too! The group was only put together for this date – and combines the subtle touches of MJQ members John Lewis on piano and Percy ... CD