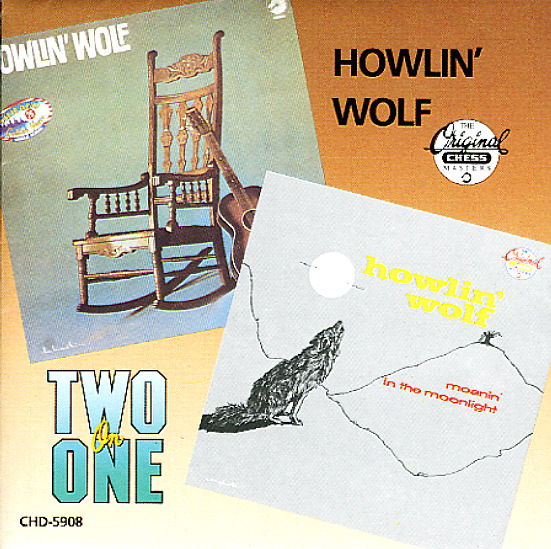 2 blues classics from the great Howlin Wolf – back to back on a single CD! First up is the self-titled Howlin Wolf – a record that has Wolf tightening it up a bit from his earliest years at Chess, and moving into a groove that would forever make him one of the key artists to record for the label! The raspy, rootsy feel of earlier years is still in place – but the recording quality's a bit better, and the tunes have a more unified feel – thanks partly to some classic compositions from Willie Dixon, whose work makes up a very big part of the album! Tunes were recorded between the years 1959 to 1962, and brought together for the record – and titles include "Shake For Me", "Spoonful", "Going Down Slow", "Down In The Bottom", "Wang Dang Doodle", "Red Rooster", and "Tell Me". On Moanin In The Moonlight, a set filled with raspy vocals, Wolf sings in a way that definitely lives up to his nickname! The sound here is spare and stripped down, with very little accompaniment – usually just a bit of guitar, piano, bass, and drums – and sometimes not even all that much! Wolf's vocals are wonderful throughout – archetypal, but not nearly as cliched as some of his contemporaries came to sound – with a timeless feel that really holds up throughout. Titles include "Smokestack Lightnin", "No Place To Go", "All Night Boogie", "Evil", "I Asked For Water", "Forty Four", and "Somebody In My Home".  © 1996-2021, Dusty Groove, Inc.

Real Folk Blues/More Real Folk Blues
Chess, 1950s. Used
CD...$4.99
A massive Muddy Waters double-header – filled with vintage recordings for Chess! First up is The Real Folk Blues – a classic packaging of Muddy Waters' famous early work for Chess Records – brought together with a cover and title that pitch him strongly towards the growing folk ... CD

Bo Diddley Is A Gunslinger (with bonus tracks)
Chess/MCA, 1960. Used
CD...$4.99
Forget the silly cowboy costume on the front cover – because this is a heck of a great album! Bo might have gotten saddled (no pun intended!) with a silly gimmick for the title and image of the set – but the album's one of his best from the early Chess years, and features a rip-roaring ... CD