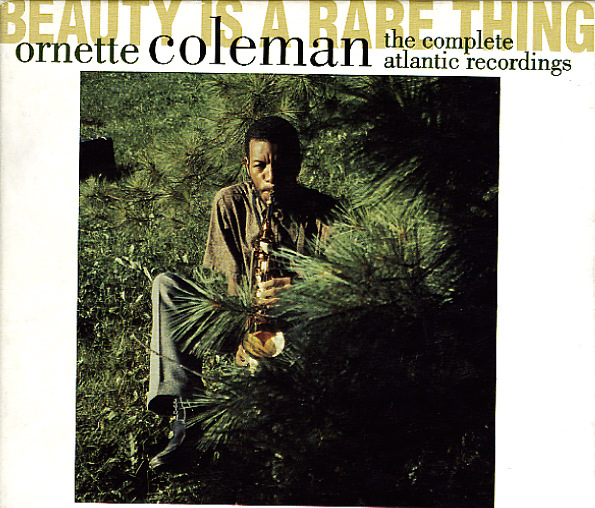 We'll be honest with you – we love this stuff! Sure, Ornette made some great recordings for a number of other labels – but as a whole, his Atlantic stuff is some of the greatest modern jazz ever recorded, and no other period of an artist is more worth collecting and having in a complete format than this one! The package is unbelievably thorough – and includes not only all the tracks from classic albums like Change Of The Century, This Is Our Music, Free Jazz, Shape Of Jazz To Come, Ornette!, Ornette On Tenor, The Art Of The Improvisors and Twins – but also 6 previously unreleased tracks, and rare material like Ornette's Japanese-only LP To Whom Who Keeps A Record plus 2 selections from Gunther Schuller's Jazz Abstractions featuring Ornette! There's 6CDs in all – packaged in a great case with a well annotated booklet. Titles include "Proof Readers", "Revolving Doors", "Joy Of A Toy", "Cross Breeding", "Variants On A Theme Of Thelonious Monk", "Eos", "Focus On Sanity", "Una Muy Bonita", "Lomely Woman", "Little Symphony", "The Circle With The Hole In The Middle", "Beauty Is A Rare Thing", "Folk Tale", "The Face Of The Bass", "Brings Goodness", "Rise & Shine", and lots and lots more!  © 1996-2022, Dusty Groove, Inc.
(Out of print. A great copy!)

Clown (deluxe edition with bonus tracks)
Atlantic/Rhino (Argentina), 1957. Used
CD...$7.99
Stunning stuff – and one of the greatest Charles Mingus albums of all time – a true treasure recorded in that magical year of 1957, when Mingus was finally finding his strongest voice in modern music! The album's near-perfect from start to finish – as bold a statement in jazz as ... CD

Vision's Tale
Antilles, 1989. Used
CD...$2.99
One of the straightest of the early albums recorded by Courtney Pine for Island – a set done in New York under the supervision of Delfeayo Marsalis, and featuring Pine blowing mostly smooth and easy on a set of standards and originals. Ellis Marsalis makes some surprisingly nice ... CD