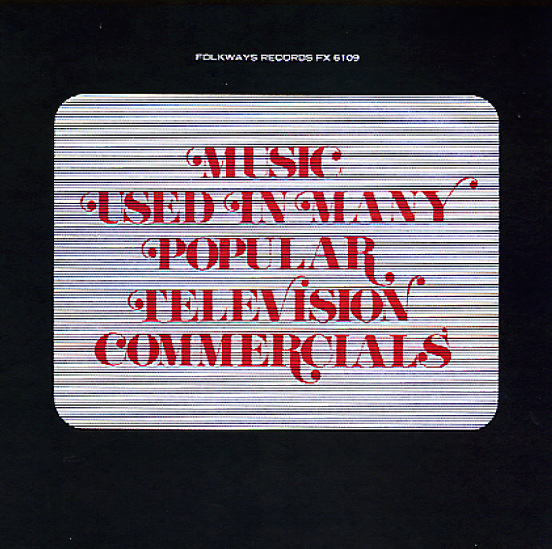 A haunting batch of commercial music from the 70s – billed in the notes to Bosworth Ensembles, which makes us almost think that the work's from the Bosworth Sound Library – even though the record was issued in the US by Folkways! Most of the music here is relatively gentle – seductive 70s themes played on piano, keyboards, guitar, and other light instrumentation – the kind of tunes that must have been beautiful slinking behind the products featured in the TV ads – which include Zenith TVs, Buick station wagons, Dannon yogurt, and Revlon perfumes! Composers are listed as T Kinsey, J Pearson, V Flick, B Ebbinghouse, and K Palmer – all names that might be Brit Easy composers – and titles include "Guitarama", "Walking On Velvet", "Theme For Two Lovers", "Pastorella", "Fleeting Clouds", "Devil's Delight", "Apollo 15", and "Slow Glow".  © 1996-2021, Dusty Groove, Inc.
(Special limited CD – pressed up for us by the Smithsonian Folkways label. Comes with original cover artwork, and the CD also features a PDF file with the original liner notes and other materials from the original record release.)

Walkabout (180 gram pressing)
Roundtable (Australia), 1971. New Copy
CD...$16.99 18.99 (LP...$32.99)
A beautiful and exotic score from the great John Barry – one that never had as much circulation on record as some of his bigger hits of the time, but which is equally well deserving of praise! The music is done for Nicolas Roeg's film Walkabout – set mostly in the Australian outback ... CD